Marijuana Times has penned a piece on NJ’s no.1 legal cannabis advocate Weedman….

While “Weed Day” 4/20/21 marks a luminous occasion for longtime marijuana activist and entrepreneur, Ed “NJWeedman” Forchion, in his home state of New Jersey, per the recent legalization of cannabis, the victory is somewhat bittersweet for him. The bitter is that his current “Citizen’s Dispensary”operates as a black-market operation as he continues to battle for inclusion within the legal arena.  The sweet is, not only a huge in-store and online celebration party this 4/20, but also the announcement of his expansion, with a 420-themed lounge opening soon in Miami, Florida, entitled, The Joint of Miami.  Onsite festivities for this 4/20 at NJWeedman’s Joint, located at 322 E. State St. in Trenton, include vendors, live entertainment and food with online streaming across all the NJWeedman’s Joint social media platforms and website.

A self-confessed weed smuggler from the early 90’s, Forchion’s 1997 arrest by the Camden County Drug Task Force and members of the local DEA would turn out to be just one of many over several decades. Never one to back done from authority, he achieved media notoriety when he was arrested for smoking marijuana in front of the entire New Jersey State Assembly in 2000 and garnered a national platform when he fired it up at the Liberty Bell in Philadelphia, PA during the Republican National Convention.   It was 10 years before the launch of Instagram and smoking weed publicly was still a criminal act, but there was no social media to make such radical deeds of civil disobedience go viral. Over 20 years later however, with marijuana finally legalized in over half of the United States, Forchion knows that his consistent battles on behalf of the plant are part of the steam engine behind cannabis now being heralded as a ‘new’ billion-dollar industry. 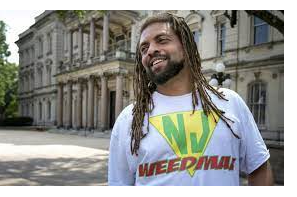