Reading this Denver Post report we’re wondering why he isn’t in Jail. Be that as it may.

A Denver attorney who was arrested at least four times in 2019 was suspended Friday from practicing law for one year and one day.

The prominent Denver attorney and legal marijuana proponent was disciplined for committing a criminal act that reflected poorly on his fitness to be a lawyer, for charging unreasonable fees, mishandling client funds or property, failing to promptly and effectively communicate with clients and representing clients despite conflicts of interest, among other professional violations, according to the judge’s order.

Corry was arrested four times between June and October 2019 and faced allegations including violating a restraining order, driving under the influence, committing domestic violence and threatening people in public with a sword.

In 2013, Corry was arrested for smoking marijuana at a Rockies game and smashing the window of a recreational vehicle.

Corry was among the most prominent marijuana attorneys in the state, helping to draft Colorado’s successful marijuana-legalization ballot initiative and representing marijuana advocates in several significant legal victories.

He will have 14 days to notify his clients of the suspension, which began Friday, according to the order.

But unbelievably there’s more to Corry..

In regard to his complete rap sheet, it dates back more than twenty years. Here are some highlights from incidents that predate 2019:

Corry was arrested on suspicion of kidnapping and more circa June 14 in connection with a crazy drive at Denver International Airport motivated by a supposed pursuit by Arabs with a helicopter. And on July 2, he was handcuffed for allegedly waving a samurai-style sword at people near Eighth Avenue and Acoma Street.

• In 1998, Corry was charged in Washington, D.C., with menacing some drinking buddies using a shotgun. For this offense, he served 35 days in jail.

• In 2006, he was accused of sexual assault. In that incident, a female friend with narcolepsy who’d been drinking wound up spending the night at the Arvada residence Corry shared with his then-wife, fellow attorney Jessica Peck. The woman subsequently awakened to discover that a naked man was on top of her. She initially thought it was her boyfriend and began performing oral sex on him, only to discover moments later that the person in question was actually Corry, who later blamed his behavior on alcohol. He eventually pleaded guilty to third-degree assault, a misdemeanor, and in January 2007, he was sentenced to five years of probation and sixty days in jail. Corry is said to have served 44 days before being released early for good behavior, and underwent treatment for substance abuse.

• In June 2013, cops nabbed Corry after he allegedly broke the window of a recreational vehicle.

• On September 25, 2013, at Coors Field, during the final home game of Colorado Rockies all-star Todd Helton, Corry was among several people seen publicly smoking marijuana. When an officer asked him to hand over his joint, according to the arrest affidavit, he replied, “No, I don’t have to, it’s legal.” Other quotes attributed to him include: “I don’t have any ID and don’t have to give you shit”; “Oh, fuck off, cop. It’s a citation only — public consumption”; “I am going back to my seat and watch the game”; “You’re a stupid cop. You are going to make this easy for me. You can’t search me. It’s a citation only”; and “You can go wherever you want. I am getting my stupid citation for public smoking and going back to the game. You can fuck off and bring me my ticket.”

According to the probable-cause statement, the most recent incident occurred at 10:49 p.m. on September 27. That’s when Corry was contacted by two Denver police officers following a traffic accident with another occupied vehicle on the 1400 block of North Downing. His so-called “indicia of impairment” included an all-caps roster: “SPEECH AS SLURRED/MUMBLING, BREATH HAD A STRONG ODOR OF AN UNKNOWN ALCOHOLIC BEVERAGE, BALANCE WAS SWAYING/STAGGERING, EYES WERE BLOODSHOT/WATERY.”

Because Corry was immediately taken into custody because of the crash, he wasn’t offered a voluntary field sobriety analysis, and he refused to participate in what’s referred to as a “chemical test” before being transported to the “DUI room” at a nearby Denver police station. Upon his arrival, law enforcers checked their records and discovered two separate protection orders written in his name, as well as his “pre-trial supervised release status.”

For instance, Corry is due in a Denver courtroom on November 15 on a motion hearing related to the samurai sword matter. And we’ve also learned that he has an upcoming hearing related to allegedly violating one of those protection orders — a permanent one concerning the safety of his ex-wife, Peck. 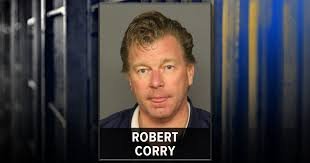