And, today the 130-page Final Report by The Taskforce on Innovation, Growth and Regulatory Reform (TIGRR) recommends a significant overhaul of the current system.

Rules Based On Patient Benefit

And go on to say in a recommendation summary that: ‘Regulation of medical cannabinoids and medicinal CBD should move from the Home Office to the DHSC / MHRA (Department of Health and Social Care and Medicines and Healthcare products Regulatory Agency) to create a regulatory pathway for assessment and approval based on patient benefit.’

Prof Mike Barnes, Chairman of the recently-formed Cannabis Industry Council said: “it is really important that there is a clear pathway to licensing both for industrial hemp licences and high-THC cultivation licences. This can only help the development of a thriving cannabis industry with consequent job creation and government tax income.

“Better inter-governmental co-operation must be beneficial as long as those involved understand that cannabis is a plant and not a pharmaceutical product.”

Siân Phillips, Managing Director, of the Cannabis Trades Association, welcomed the moves to free-up hemp cultivation – which should remove the restrictions on the use of flowers and leaves – but expressed concerns over its failure to recognise the sustainable benefits of the hemp plant and how the process will impact over-the-counter CBD and vaping industries.

Jamie Bartley, CEO, of Unyte Hemp and a member of the recently-formed UK Cannabis Industry Council welcomed the suggestions.

He went on to say: “We need to remove cannabis from the Misuse of Drugs Act in its entirety, there is no evidence of harm and there is lots of evidence of its medical benefit.

“Without a streamlining of the licensing framework, we will not see any significant growth in the sector. We need a cannabis department within government that has representation from all stakeholder departments and engages with industry – we need a collaborative approach.”

The TIGRR report highlights two issues with UK hemp and cannabinoid licensing saying: The first is the current regime makes it very difficult for scientists in the UK to conduct pharmaceutical research on potential medical benefits of cannabinoids and medicinal CBD.

‘International examples and leading scientists working in this area have shown that sensible, but limited, reforms to the current licensing process could unlock significant investment into UK medical research into cannabinoids for pain relief’.

The report then goes on to say:  The second is the dichotomy that whilst there is in the UK a fast-growing, legal and well established consumer market for medicinal CBD for a range of pain and neurological conditions, current Home Office rules make it impossible for them to be produced here. This means that domestic consumers are relying on imported products and the UK is losing out on a c£1 billion medicines industry.

And adds: ‘At present this is prevented because the rules governing CBD medicines are not properly separated from the criminal law on banned substances derived from cannabis.

‘Our recommendations cover legal-to-use CBD medicinal products only. This report has focused on potential medical usage and does not recommend decriminalisation for recreational use.’

TIGRR was launched to examine how the UK can boost its economy by taking advantage of its post-Brexit regulatory freedoms.

It also examines the role sectors such as financial services, energy, transport, agriculture and ‘Net-Zero’ technologies, such as offshore wind and hydrogen can play in supporting UK growth.

Prime Minister Boris Johnson welcomed the report today saying: “Your report shows what a fully sovereign United Kingdom can achieve given sufficient ambition and vision on the part of its government. I look forward to drawing on your work in the months and years ahead as we build back better than ever before.”

A spokesman for the Prime Minister’s office says it will consider and respond to the report’s recommendations in due course. 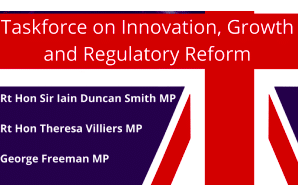