So much for that world beating medical cannabis export market etc.

We love the fact that the deal was meant to be done in 5 days time and that they’ve left it this long before pulling out.

We’d imagine the Germans are fairly pissed off

Did some short sellers or shareholders do well on the announcement earlier in the year would be the question we would ask.

Elixinol Wellness has pulled out of a deal to buy German CBD company CannaCare Health after due diligence revealed the German market has become too competitive for the acquisition to be viable.

In March, Elixinol signed a binding agreement to acquire CannaCare for an upfront consideration of €3m in cash and €6m in Elixinol shares. A second earnout payment up to a maximum of €15m in Elixinol shares would have become payable in March 2022, based on CannaCare achieving revenue and profit targets.

However, this morning Elixinol told the ASX the deal, which was due to complete on July 5, 2021, was off.

The company said it had concluded that the acquisition, and the investment required to generate profitable returns, were not in the best interests of its shareholders.

It added: “Due to this changing German market outlook and strategic direction of both companies in the period since agreeing the proposed acquisition, the parties have together agreed to exercise their rights under the Share Purchase Agreement to mutually terminate the acquisition.” 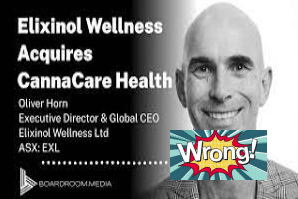