San Francisco lawmakers have unanimously approved a measure calling for the decriminalization of psychedelics like psilocybin and ayahuasca. 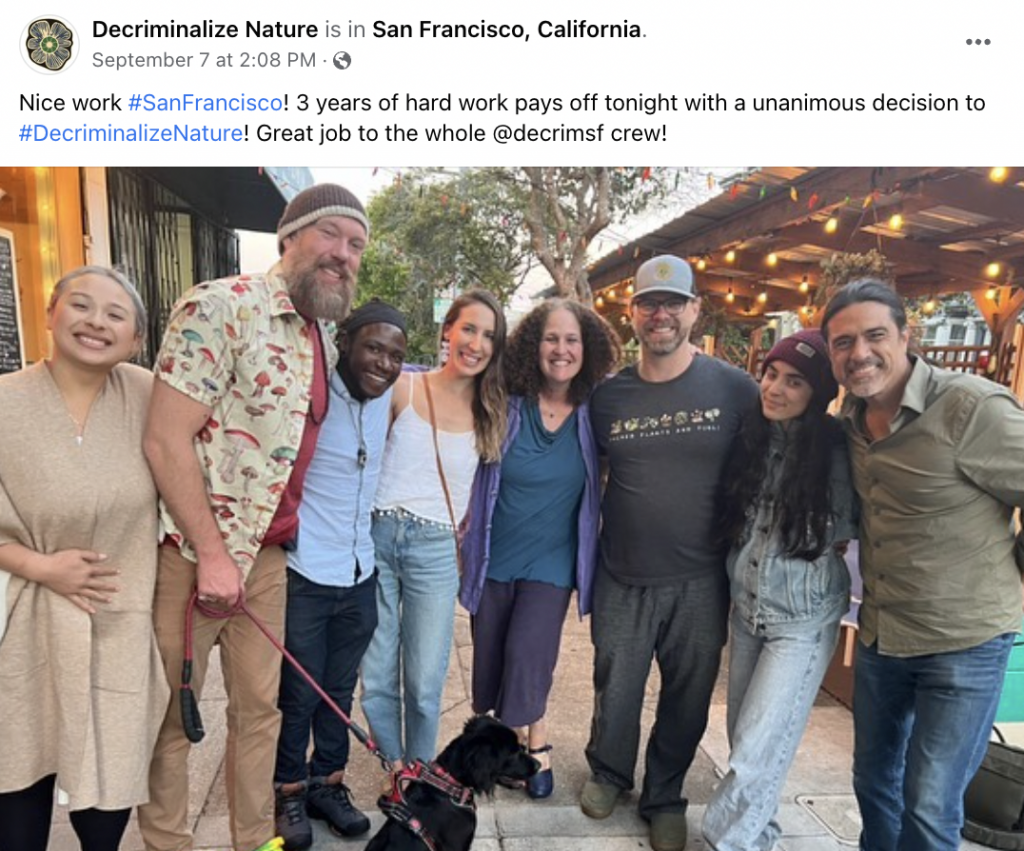 The Board of Supervisors approved the measure, sponsored by Supervisors Dean Preston (D) and Hillary Ronen (D), on Wednesday. While it doesn’t immediately enact changes to criminal justice policy in San Francisco, it urges police to deprioritize psychedelics as “amongst the lowest priority” for enforcement and requests that “City resources not be used for any investigation, detention, arrest, or prosecution arising out of alleged violations of state and federal law regarding the use of Entheogenic Plants listed on the Federally Controlled Substances Schedule 1 list.”

The San Francisco Board of Supervisors passed a resolution earlier this week decriminalizing psychedelic drugs within the city while also urging both the state and federal government to pass similar legislation.

In the past several years, the decriminalization of psychedelics, usually pushed as a away to help treat several mental issues such as PTSD, has been brought to before many city councils and state legislatures across the U.S. A handful of cities, including Washington, D.C., Denver, Oakland, and Santa Cruz had already passed such a measure before the Tuesday vote in San Francisco, with the state of Oregon passed a law making magic mushrooms legal for medical use in 2020.

In California, a statewide decriminalization of several psychedelic drugs recently failed last month. Senate Bill 519, authored by Senator Scott Wiener (D-San Francisco), would have decriminalized dimethyltryptamine (DMT), ibogaine (psychedelic substance), lysergic acid diethylamide (LSD), mescaline (psychedelic hallucinogen), psilocybin (magic mushrooms), and 3,4-methylenedioxymethamphetamine (MDMA, ecstasy, molly) possession for personal use and social sharing. However, despite numerous amendments and changes made to the bill to appease many lawmakers concerned about the bill, SB 519 never picked up an adequate amount of support, with the bill dying out before a crucial vote on it could take place. While Wiener has said he will bring the bill back next year, a still low amount of support has continued to way down the effort.

Instead, focus shifted to Wiener’s home city of San Francisco, with the city resolution even acknowledging Wiener’s bill as a major influence. Calling the use of, growing of, and distributing of plant-based psychedelics (aka entheogenics) “the lowest law enforcement priority”, the resolution, authored by Supervisor Dean Preston, also stated that “psychedelics can benefit psychological and physical wellness, and have been shown to be beneficial for people dealing with addiction, trauma, and anxiety.” The city going after psychedelic users was also specifically touched on, with the resolution adding that “City resources are not be used for any investigation, detention, arrest, or prosecution arising out of alleged violations of state and federal law regarding the use of Entheogenic Plants listed on the Federally Controlled Substances Schedule 1 list.”

In a unanimous vote, the resolution was passed on Tuesday. Supervisor Preston said in a statement later that day that “I am proud to work with Decrim Nature to put San Francisco on record in support of the decriminalization of psychedelics and entheogens. San Francisco joins a growing list of cities and countries that are taking a fresh look at these plant-based medicines, following science and data, and destigmatizing their use and cultivation. Today’s unanimous vote is an exciting step forward.”

“This is extremely dangerous,” Michael Ruiz, a former Bay Area police officer and current drug abuse victim advocate, told the Globe on Thursday. “There may be benefits to using these drugs, but right now it’s still the wild west on regulating them and finding the exact boundaries for safety. We need that first before we even think about legalizing or decriminalizing on even a small scale. These Supervisors in San Francisco are just putting caution to the wind right now and aren’t looking at the long-term effects. Remember, when we talk about decriminalization and legalization of drugs, we need to consider how they affect everyone, not just the very small group of people needing them for medical assistance. The Supervisors on Tuesday proved that they just don’t care about those citizens, and it’s horrifying.”

“The ultimate goal, at least the one we see now, is to decriminalize a whole host of psychedelics on the state level, and this resolution will help build the case for that. San Francisco is a big city, which along with Oakland, could help cement the notion that they are “here to stay.” For many, we want to see safety studies, studies from federal agencies, and so many more pieces of evidence to even consider this. You know, they talk about destigmatizing them, but they are stigmatized for many very good reasons. But they just don’t want to hear it.”

A new state bill calling for the decriminalization of certain psychedelic drugs is likely to be introduced early next year.