Opinium polled 200 police officers. The research was carried out online between October and November 2022. Polling of medical cannabis patients was carried out among 1,007 patients of Sapphire Clinics.

Despite the legalisation of medical cannabis in 2018, experts have warned that there is still inadequate education on the topic for police, which is affecting legitimate medical patients.

At Sapphire Clinics we commissioned research which shows two-fifths (40%) of police officers have encountered someone using cannabis allegedly obtained on prescription. But despite becoming a regular occurrence, almost a third (29%) are unaware that cannabis containing THC can be legal when prescribed by an appropriate healthcare professional.

In fact, two-thirds (66%) say their training on laws around medical cannabis has been inadequate or non-existent and nine in 10 (89%) would welcome further education on the topic.

The findings come following a number of news reports where patients’ medical cannabis has been unjustly seized.

As part of the research more than 1,000 patients at Sapphire Clinics currently prescribed the medication for a range of conditions were also surveyed.

More than one in 10 (12%) of the patients surveyed, have had previous contact with police regarding their prescribed cannabis and, overall, two-thirds (66%) admit they fear the prospect of having to interact with police officers.

As a result, seven in 10 (69%) worry about using their medication outside of their own homes with many even leaving their prescription behind when going to locations such as restaurants (69%) or work (53%).

Allen Morgan a former police officer who holds a master’s degree in Drug Use and Addictions and is a leading expert on cannabis production cases in the Criminal Justice System says: “Raising awareness amongst frontline police officers regarding the use and legality of medical cannabis is a significant issue for the police service. It is incomprehensible that someone in possession of a legally prescribed medicine could be stopped, arrested and their medicine confiscated. Many medical users clearly fear interaction with the police and perhaps with good cause as this study demonstrates. Amongst many people who have contemplated seeking a prescription for cannabis there can be some stigma attached to it and a

reluctance to seek help, which in part may be borne out of a fear of being stopped by the police and potentially arrested. Front line police officers face considerable pressures but preventing the arrest of people with medical conditions and the implication of seizing legally prescribed medication is critically important, particularly as patient numbers are likely to grow exponentially in the coming years.”

Dr Simon Erridge, Head of Research and Access at Sapphire Medical Clinics, says: “It has now been four years since legislation made medical cannabis available on prescription, but we are still hearing of some patients having unwelcome interactions with police forces.

“This is almost certainly down to education; in fact, the research showed nine in 10 police officers would welcome more training on the topic.

“We have written to the National Police Chiefs Council to make them aware of our findings and offering training to police forces across England and Wales in addition to the work we already carry out with Police Scotland to improve education and awareness.

“We hope this will both free up police time and allow patients legitimately using medical cannabis to treat their health conditions to do so without fear.” 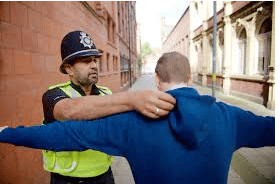