The answer for a growing number of businesses, trade groups and charities is by providing funding to an all-party parliamentary group (APPG).

Today we officially formed the APPG on CBD products, which will help consumer safety and tackle the regulatory gap that is strangling this nascent £690m a year industry. #CBD #APPGCBD pic.twitter.com/2PkkLoTqNR

One company, Tenacious Labs – which hopes to amend legislation and regulations around the sale of cannabis products – told Sky News it has seen “enormous value” from its investment in an APPG.

Many voters will never have heard of these informal cross-party groups of MPs and peers who come together to discuss shared topics of interest, hold inquiries and publish reports.

But analysis as part of the Westminster Accounts project by Sky News and Tortoise Media has shown they are a growing part of the UK political ecosystem.

The number of APPGs has almost doubled since 2015, and they have received more than £20m in support from external sources since the last election.

APPGs do not receive any funding from parliament but are allowed to accept donations from outside – in many cases this comes in the form of a benefit in kind, where a public affairs firm or lobbying agency provides a secretariat to assist MPs with the administration of the group.

Usually, the organisations providing the secretariat are themselves funded by other sources, which are duly declared in the APPG register.

But in the case of the APPG on CBD (cannabidiol) products, the secretariat for the APPG is provided directly by a single company.

Changing the law on cannabis

In November 2021, the APPG for CBD products was founded, chaired by Tory MP Crispin Blunt, with the aim of “encouraging the development of UK regulation on CBD products”.

On its website, the APPG says its goal is to create a “certain basis for investors and entrepreneurs to safely serve the public and wider national interests” when it comes to commercial opportunities around non-medicinal cannabis. 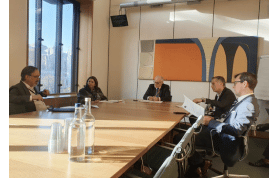