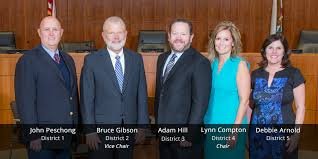 The San Luis Obispo County Board of Supervisors voted 4-1 on May 5 to pass a hemp cultivation ordinance that requires 400-acre sites with 2,000-foot setbacks, which will put an end to or seriously scale back every hemp grow that operated in the county last year.

Voicing concerns about heavy water usage, and county enforcement staff’s inability to regulate those violating regulations, Supervisor Debbie Arnold made a motion to also ban hemp in the Edna Valley, to ban growing hemp in hoop houses, and to require an additional 1,000 foot setback from urban reserve lines. Vineyard owners in the Edna Valley had voiced concerns that the terpenes from the cannabis plants could damage their crops and the smell was overwhelming tasting room and events.

Supervisor Bruce Gibson dissented, arguing that the county might as well just completely ban the crop, because the ordinance is so restrictive.

Both hemp and marijuana are cannabis plants. But hemp has 0.3 percent or less THC, the intoxicant in cannabis, and usually sells for about one-fourth the price. The hemp market is currently saturated, with most local industrial hemp growers unable to sell last year’s crop.

While county staff tested local industrial hemp farms for THC content, state and local government agencies failed to provide any oversight for the cultivation of hemp used for research. That left the door open for marijuana cultivators to operate unchecked as hemp growers. Multiple employees of local research hemp farms claim their bosses were planting several rows of hemp surrounding a larger crop of marijuana, that was then sold on the black market.

Nevertheless, county staff had proposed an ordinance with much smaller setbacks and property size requirements. Following the supervisors’ approval of the restrictive hemp ordinance, Assistant Agricultural Commissioner Marc Lea noted his surprise in an email to a group of hemp cultivators.

“Our department had some issues with the proposed ordinance, but we thought that it was a reasonable approach and represented some compromises that would enable industrial hemp cultivation to get a foothold in San Luis Obispo County,” Lea wrote in the May 5 email. “For now, suffice it to say, that the board made serious, serious changes to the proposed permanent hemp ordinance and added major restrictions. These were major, major changes which we certainly were not expected, and will essentially act as a prohibition.”

Three days later, Lea sent a second email, apologizing for the tone of his May 5 email, and asking prospective growers to contact him.

“The board hearing went in a direction that we did not anticipate, and undoubtedly, I could have been more diplomatic in my assessment of the situation in my previous email,” Lea wrote in a May 8 email. “If you have a growing location in mind and want us to make a preliminary determination of eligibility under the permanent ordinance rules, then we would be glad to do that, but we will likely need confirmation from County Planning and Building, and possibly County Counsel, before we can make an official determination of a particular site’s compliance with the permanent ordinance that was passed on Tuesday.”