Black Farmers Association of South Africa (BFASA) is advising all, on the planned protest action on the 22nd April 2021 against SAHPRA , necessary permits have granted by local authorities to allow for the Thousands of BFASA members and affiliates who will be mobilized in support of this action.

It is well known by now the role which BFASA plays in bridging the interested parties (Indigenous People, Monarchs, Traditional Healers, Rural Agriculture and Rastafarians) with the commercial road to market for all cannabis and hemp products from seed to end users.

SAHPRA has stated publicly that their actions in using the Apartheid era act of 1965 to allow them to issue licenses to whites only and foreigners, to the deliberate exclusion of the indigenous population, are at the specific instructions of the Minister of Health.

SAHPRA’s board mentions on record, that Dr. Zweli Mkhize, Minister of Health is to blame for the monopolization of the Cannabis Industry because it is him who grants the licenses to the white owned companies and if that is the truth then Dr. Zweli Mkhize must step down !

We (BFASA) still pursuing the promise that was made by Prof Rees in the virtual meeting held on the 28 October 2020, where she promised that she will give us pre-licences, this is on record and members of Parliament were present in that meeting.

(b) the council may, on application in the prescribed manner and on payment of the prescribed fee, issue to a manufacturer, wholesaler or distributor of a medicine or medical device a licence to manufacture, act as a wholesaler of or distribute, as the case may be, such medicine or medical device, upon such conditions as to the application of such acceptable quality assurance principles and good manufacturing and distribution practices as the council may determine

Thus means that SAHPRA has been given authority to decide how to issue cannabis licences to public, but SAHPRA colleagues (Prof Rees, Mama Hella & Dr. Semete) always maintain that Minister of Health is responsible for the ACT that direct SAHPRA how to issue these licences to white international companies. We feel that the skew allocation of these licences to white companies it is a crime against the Black Economic Empowerment Policy and the Constitution of our country as detailed below:

We, the people of South Africa,

We therefore, through our freely elected representatives, adopt this

Constitution as the supreme law of the Republic so as to –

Heal the divisions of the past and establish a society based on democratic values, social justice and fundamental human rights;

Lay the foundations for a democratic and open society in which government is based on the will of the people and every citizen is equally protected by law;

Improve the quality of life of all citizens and free the potential of each person; and

Build a united and democratic South Africa able to take its rightful place as a sovereign state in the family of nations.

This act does not prescribe to SAHPRA who they must issue the cannabis licenses to; however, we notice as BFASA that these licenses are given to white international companies. SAHPRA’s process, fees for applications of licenses, shows radical fight against transformation, this is the highest form of segregating people from rural areas which are majority of previously disadvantaged. The way currently things are, SAHPRA is not upholding the South African Supreme rule of law, our constitution by ignoring the demographics status as the issuing licences. (Violation of South African Human rights).

We (BFASA) still making a call that all issued illegitimate licenses must be revoked, because were issued against our constitution & BEE policy. SAHPRA is a constitutional delinquent when it comes to issuing of these licences; therefore, they need to shut down (Total shutdown).

WHY MUST SAHPRA BE SHUT Down? :

We as BFASA would like the Health Minister to be part of the delegation that will be receiving the memorundum. 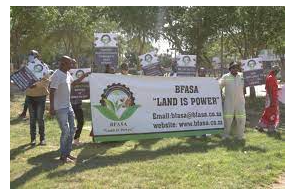