The visit, which was to strengthen trade relations and explore investment opportunities, was to further cement bilateral relations initiated by former and first Eastern Cape premier Raymond Mhlaba in 1995, aimed at building cooperation in economic development, culture, as well as science and technology.

Some of the eight cooperation agreements signed were between Hangzhou Vocational Technical Training College and the Eastcape Midlands College, which will see the two provinces working together in vehicle and machinery manufacturing, electrical management, marketing and tourism.

The third agreement of the eight was between Tuya Smart and SMD Technologies, and will result in products upgraded with a focus on the internet of things.

Eastern Cape Premier Oscar Mabuyane announced that the delegation was interested in a R140 million winery investment and an abattoir.

“Our doors are open for business from Zhejiang to come and invest in our province and create jobs our people yearn for,” Mabuyane told the delegation during a networking session at Coega Vulindlela Village.

“I am certain you have heard or seen the acts of violence that have unfortunately engulfed Gauteng. I want to assure governor Jiajun that such acts are brazen criminality and not xenophobia, as some media houses portray them. South Africans are peace-loving people with deep-seated values of ubuntu.”

Mabuyane said the Chinese delegation had arrived at a time when his province was implementing its provincial development plan, adding that through this plan the Eastern Cape had identified sectors through which it aims to re-industrialise and boost the provincial economy.

“Our two highly efficient SEZs are at the centre of re-industrialisation efforts. They are fully serviced, with access to all utilities and ICT infrastructure, and are both within close proximity to key transport networks. This is evidenced by a recent World Bank-financed study which chose Coega as one of the seven examples of success out of a thousand SEZs worldwide,” Mabuyane said.

He called on the Chinese delegation to also invest in agriculture, citing the cannabis industry, which he described as lucrative.

“The agriculture sector remains largely underdeveloped in our province despite having 300 000 hectares of arable land. This is an area with massive opportunities for both our provinces to cooperate on, particularly in areas such as citrus, grain, meat production and horticulture products.

“There are also a number of opportunities in a new sector that we are endowed with – cannabis production for medicinal purposes. Our province is not matched in the entire country when it comes to the high quality of cannabis that grows naturally in the region.

“We are in the process of finalising a licensing regime and we need investors who will partner with our cannabis farmers to develop a thriving cannabis processing industry.”

On Wednesday, the delegation was joined by Lin Songtian, the Chinese ambassador to South Africa, in Mthatha, where proposed development of the Port Saint Johns harbour and potential aquaculture projects were discussed, as the Chinese have expressed interest in the investment. 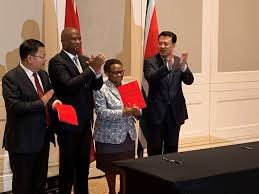