The Black Farmers Association of South Africa (BFASA) is challenging The South African Health Products Regulatory Authority (SAHPRA) on their rules, regulations, and how and to whom Cannabis farming licenses are issued in South Africa.

We caught up with BFASA national president Dr. Lennox Xolile Mtshagi who gave us insight into the reasons for what is in fact, their second protest, following a previous one where SAHPRA did not pay heed to the matters brought forward. Some of the issues being raised by BFASA are the progress and the pace at which the administration is working, the fact that the issuing of licenses is based on a very old act that has not been amended since 1965, the issuing of licenses without first addressing mitigation for those that were previously marginalized and racially excluded, the exclusion of disabled people, traditional leaders and the question of balancing the scale for those that were and are currently disfranchised.

Dr. Mtshagi gets very candid and incredibly open about his feelings on SHAPRA’s operation saying that SAHPRA had agreed to look into the grievances that were presented to them, but have actually been stalling while there has been no movement towards a transformative structure.

Dr. Mtshagi says that SAHPRA should not be making the white monopoly the priority as it further alienates people and perpetuates the unfairness of the marginalization of small farmers, black people, the people in townships and rural settings. He says that those people need to be made a priority and that it is imperative that when making decisions, reparations and compensation be taken into account for some of the injustices that some people suffered.

On the issue of corporatization, he says that the intention is not to close the doors completely to those who have access to money to apply for licenses and big corporate companies but rather that the administration of these licenses must be transparent, constitutional, be in line with prioritization of the most urgent issues like issuing licenses to the disadvantaged, the consideration of rural development, equal empowerment, building a structure that is in the standards of the medicines act, and a fair percentage where BEE compliance is applied. 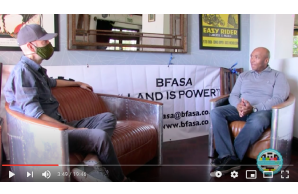