South Dakota Supreme Court justices will hear oral arguments in a challenge to Amendment A at 10 a.m. on April 28 at the state Capitol after attorneys representing the organization South Dakotans for Better Marijuana Laws appealed a lower court ruling striking down the amendment.

In February, a Hughes County judge ruled the ballot measure, which earned 54% support in the Nov. 3 election, unconstitutional because it violated a requirement that constitutional amendments be limited to a single topic. That it also gave sole governing authority around marijuana to the South Dakota Department of Revenue, not the Legislature, also factored into Judge Christina Klinger’s decision

The plaintiffs in the case are Pennington County Sheriff Kevin Thom and Highway Patrol Superintendent Col. Rick Miller. Miller’s legal expenses are being covered by the state, authorized by Gov. Kristi Noem through an executive order. 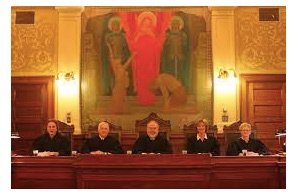