ICBC reports on the waiting game in Spain.

Once upon a time, in a town called Garray, about 9 kilometres from Soria, on the banks of the Douro River sat a large greenhouse. It used to be the largest producer of red roses in Europe. After being bought by an American investment fund that specializes in the cannabis sector, they applied for a license to the Spanish medical authority to produce cannabis.

Aleia Roses, the owner of the greenhouse, was one of the largest companies in Soria, with more than 250 workers. The company had planned to produce 40 million flowers a year. Full Moon investments bought the facility in 2020 and planned to grow roses and medical cannabis. However, last April the owner decided to ditch the rose idea and focus only on cannabis. Since then, the permit has not arrived and everyone is getting nervous.

The situation with new license development in Spain has been tricky for some time. There are, according to insider sources, 4 licenses, and these are held by various members of the Spanish Royal Family plus Alcaliber, a private company now shipping Spanish-grown cannabis to among other countries, Germany.

One of the reasons that licenses are difficult to obtain in Spain is that AEMPS is highly suspicious of outside investors obtaining licenses and then merely flipping them without developing a site. The AR project is different – namely, the facility is already built, and it is a form of economic development for Spaniards in a depopulated region that desperately needs the work. 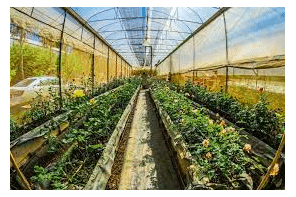