HAVERHILL — Amid a contentious legal battle over disputed fees and other money paid to the city, Stem marijuana shop owner Caroline Pineau wrote a check for $365,796 in tax payments Thursday during her dispensary’s first year of operation.

Pineau handed over a ceremonial check to Councilor Michael McGonagle on the steps of City Hall. The money reflect 3% of all gross sales, as agreed to by Pineau when she signed her shop’s host community agreement with the mayor in December 2018.

“It has been an amazing, if trying, first year of operations considering the challenges posed by the pandemic,” Pineau said in a statement. “We couldn’t be more happy to be able to create jobs, serve our wonderful customers and contribute tax payments to help the city of Haverhill and its citizens.”

McGonagle applauded Pineau for following through on her commitment to pay the taxes as promised, in addition to employing 25 workers and contributing more than $50,000 to charitable causes in Haverhill.

“Stem has lived up to the agreement they were forced to sign and I expect more positive results going forward,” McGonagle said. “I am working with the majority of my peers on the council to have the mayor set the local option portion of cannabis tax revenue in a reserve account. This account would be used to fund mental health issues, youth after school programs and nonprofits engaged in helping young adults find training, employment and housing.”

In addition to the 3% local option tax payment, Stem also paid $13,667 to the city in property taxes for its downtown location at 124 Washington St.

The local option tax payment made Thursday follows an Essex Superior Court judge’s decision in May to deny Stem’s request to place a separate $356,000 in impact fees into an escrow account while a lawsuit against the city is pending.

In her lawsuit, Pineau argued that officials should identify and document the impact her shop has on the city before she paid the fees called for in the 2018 agreement.

The city said that since the agreement called for the payment of the fees, Pineau should pay the money and the city would provide detailed documentation later.

Attorney Michele Randazzo, who represents the city, said the pandemic interfered with the city’s ability to determine the full impact of Stem and related costs to the city. She said it is reasonable that Haverhill needs more time to compile information about Stem’s impact.

Pineau made the contested impact fee payment in May. In his ruling, Judge James Lang said Pineau would be able to recover her money from the city should she win the lawsuit. 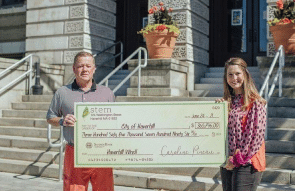