The survivor of the mass shooting at an Oklahoma marijuana farm was arrested Wednesday as a result of an investigation into the legality of the operation.

Yifei Lin, 44, is accused of conspiring to commit fraud against the state and illegally manufacturing and trafficking marijuana. He is listed in state records as a 25% owner of the farm 15 miles west of Hennessey.

Four people were fatally shot inside a building at the farm Nov. 20. Lin was wounded.

He was the first victim found by Kingfisher County sheriff deputies when they responded to a call about a possible hostage situation. He was inside a pickup truck

“Are there other people inside?” a deputy asked him, according to body-camera video released by the sheriff.

“Yeah,” he said in a strained voice.

More:Oklahoma marijuana farm where 4 workers were killed one of 63 tied to ‘accountant’

His arrest came as he was being released from a hospital and after narcotics agents concluded he had used a straw owner to get around Oklahoma licensing laws.

“Yifei Lin knowingly signed documents which allowed for the fraudulent obtaining of a marijuana license and registration for a ten-acre farm, more commonly known as Lu & Chen Inc.,” a narcotics agent told a judge in an arrest affidavit.

Narcotics agents identified the straw owner as Richard Ignacio of Bethany. He told agents Nov. 21 that he has made $100,000 over the last two years from the marijuana farms where he lent his name in order to fraudulently obtain licenses and registrations, according to the affidavit.

“He stated he did so for six different farms located throughout the state,” the agent wrote. 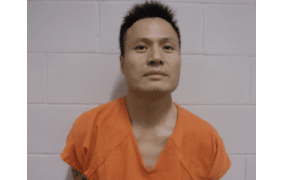