It’s the same in the US and it seems an absolute waste.

1.5% THC we can assure the Tasmanian government isn’t going to turn the whole island into a bunch of ne’er to do well hippies !

All that energy used to grow and harvest that crop  wasted

We find it beyond bizarre in this day and age they can’t think of another solution except destruction, both for the crop and the farmer.

Although as he says he’s learnt his lesson after sourcing seed from China !

An entire crop of hemp has been destroyed in Tasmania’s north because it had a higher than allowed concentration of the psychoactive component also found in marijuana.

The crop has been ploughed into the ground because the levels are outside the legislated limit for hemp as food, with the farmer blaming a cooler than average season.

“Unfortunately, the crop of seed that I sourced from China … has tested over the 1 per cent THC threshold and the legislation dictates anything over 1 per cent needs to be destroyed,” said hemp farmer and president of the Tasmanian Hemp Association, Tim Schmidt.

In hemp, the cannabis plant has been bred to have extremely low concentrations of the psychoactive component tetrahydrocannabinol, or THC.

While marijuana may contain upwards of 25 per cent THC, hemp typically contains less than 1 per cent, and smoking it for a high is useless.

However, Tim Schmidt’s hemp at 1.5 per cent THC was a tiny bit closer to the plant which gives people a high.

It has flummoxed the farmer and his consultant agronomist, Konrad Chung, because the pair planted the same seeds last year with lower results.

“It may be a genetic thing, that the plants respond to [the weather] that we’ve had, that would produce a high THC level,” Mr Chung said.

“There was plenty of rainfall so those sort of conditions might have induced it to produce a higher THC level, which has been reflected in this situation,” Mr Schmidt said.

Next time he plants, he’ll re-think which seeds he uses.

Over two years, the hemp seeds sourced from China have given him a 50/50 success result.

“The literature and research I did explained to me that it was a low THC variety but in practice it’s not, it’s a lesson well learnt, that’s for sure,” Mr Schmidt said.

Tasmania produces about two-thirds of Australia’s hemp for food, with the seeds used in breads and cereals and as an alternative protein.

Tasmania has been growing hemp on a small scale since the 1990s for fibre and cosmetics.

When laws changed in 2017 to allow hemp seed to be sold as food, farmers began to take the crop more seriously.

“The consumers are starting to learn the benefits of hemp foods itself and things are expanding,” he said.

He plans to include it in his cropping rotation again next season, on a different paddock.

In the meantime, it’s hoped this year’s destroyed crop will at least do some good in the soil.

“I’d prefer not to burn it because it’s a terrible waste of carbon,” he added.

“It is amazing stuff, it is a wonderful garden mulch but it breaks down rather quickly in the right conditions if it’s in contact with the soil and moisture and so on, you wouldn’t believe such a tough, fibrous plant,” he said.

As for the future, the experience has not put him off a crop he is very passionate about.

“It is a very new industry and we’ve got a magnificent bunch of farmers that have learnt heaps over the past five years,” he said

With the industrial hemp industry in Tasmania in its infancy, Mr Schmidt said it was not surprising there’s a few “teething problems”.

“Every year we learn a little bit more and we get a bit better,” he said. 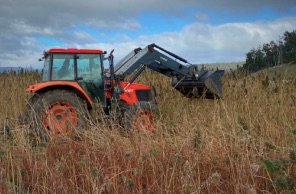