Praphat Panyachatrak, president of the Thai National Farmers Council (NFC), said the council hopes the new law that allows farmers to grow marijuana and hemp for export will be fully enacted next year.

Here’s the story from the Nation. If the law does get enacted we believe it’ll be a blow for producers in Australia & NZ especially who’ll have some competition to deal with. Today Australian website Cannabiz reported that Aussie companies hoped for big export numbers to the likes of the UK & Germany. We’d humbly suggest that the Thais over time will produce better product at a cheaper price and will be able to get product to market quicker and more efficiently. They already have great trade relations with the EU and German consumers know a lot more about Thai agricultural products than they do Australian product

“The legislation draft is being considered by the Public Health Ministry and the National Legislative Assembly, and should be announced soon,” he said. “NFC has always been advocating the cultivation of both plants and we hope new laws will make it easier for farmers to apply to grow them.”

Praphat added that under the new law, farmers can get a permit to grow the plant as soon as they get an order from overseas, without having to cooperate with universities or medical institutes.

The NFC president added that the council is also considering reviving the project of growing wild konjac as biofuel.

“Wild konjac used to be an economic crop in many provinces, but was abandoned later due to a lack of market,” he said. “Now we are thinking of promoting it again to use as fuel for community power plants, which the Energy Ministry plans to put in place as soon as possible.” 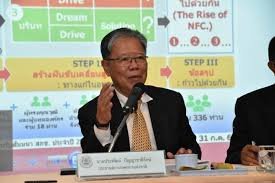