They were apprehended during a police and health inspection along a road in Phra Nakhon district on Friday night, said the Director-General Thongchai Lertwilairattanapong of the Department of Thai Traditional and Alternative Medicine.

According to Dr. Thongchai, the inspection was conducted to identify those who violated Public Health Ministry regulations regarding cannabis control. He said that among the six arrested were two street vendors who allegedly distributed cannabis buds without permission.

He said two others were allegedly found violating the cannabis license and operating in a restricted area, and that items were seized and taken to a local police station in Bangkok.

The fifth individual was discovered to have allegedly allowed customers to smoke weed (cannabis) inside a shop, while the sixth allegedly provided a weed smoking room at a different, unlicensed location.

Authorities initially halted operations while they reviewed the license details. 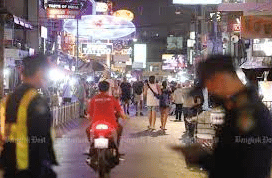