The kingdom in 2018 became the first country in Southeast Asia to legalise medical marijuana, although many Thais have long used the herb in traditional treatments.

The government has invested in the extraction, distillation and marketing of cannabis oils for use in the health industry.

In a statement, Anutin said the administration wanted to “support with sincerity patients who need to use cannabis for treatment”.

A bill is expected to go before parliament in the coming weeks which would allow individuals to grow the plant for medicinal purposes — something only state agencies can do currently.

The minister said he hoped the changes could boost rural incomes across the northeast by allowing farmers to grow and sell the plants.

Medical research has shown cannabis oil can help ease chronic pain and conditions such as multiple sclerosis and epilepsy.

Recreational use and trade of marijuana in Thailand is still illegal, however, and convictions carry up to 10 years in prison. 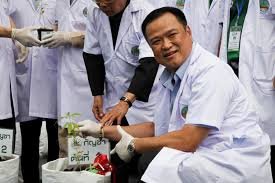