There’s a new high in town.

A growing number of Chicago businesses are now exploiting a loophole in federal law that appears to allow the unfettered sale of a trendy hemp byproduct called Delta-8-THC, which has commonly been described as “marijuana-lite” or “diet weed.”

Retailers across the city have started selling a variety of Delta-8 products in settings that resemble licensed cannabis dispensaries but aren’t subject to the same stiff regulations. Many sell everything from edibles to vaping cartridges, as well as smokable hemp flower sprayed with Delta-8 extract.

Some places are even dosing food and drinks with Delta-8 and allowing customers to consume it on site. That flies in the face of a hard-fought provision in the state’s marijuana legalization law that tightly regulates public consumption, which isn’t allowed in Chicago yet.

Those spots have become extremely popular — with lines stretching down the block.

“People travel to Chicago because it’s Chicago and they make it a point to stop here because of the vibe,” said Adryan Delgado, the manager of Wake-N-Bakery, a coffee shop in Lake View that sells drinks and pastries infused with Delta-8 and CBD.

Waits can be 30 minutes to get inside, Delgado said.

Delta-8 is similar to Delta-9-THC, the psychoactive compound in weed that gets users high, though it’s extracted from hemp and not marijuana. Those selling Delta-8 claim it has all the upsides of pot and none of the buzz-killing side effects, like anxiety and paranoia.

Entrepreneurs seized on Delta-8 after the federal Farm Bill of 2018 made legal the distribution and sale of hemp and its byproducts. That law explicitly excluded Delta-9, but there’s no mention of its mellower relative.

As Delta-8’s popularity has grown, the influential trade group that represents Illinois’ licensed pot businesses has started lobbying state and federal lawmakers for stricter regulations while raising concerns about its safety. State Rep. Bob Morgan, a pro-pot Democrat from Deerfield, has already introduced legislation that would require products containing Delta-8, CBD and other unchecked cannabinoids to be tested and labeled.

“Many of these products are unsafe, untested, and it’s only a matter of time before someone gets hurt,” Morgan said on Twitter Monday, noting the bill is slated for a House vote this week.

Pam Althoff, a former state senator who now serves as the trade group’s executive director, said Delta-8 sellers are increasingly cropping up in “cannabis deserts,” where licensed pot shops haven’t opened. She described Delta-8 as a potentially dangerous “substitute” for legal weed — and one that’s being sold at lower prices.

“Delta-8 is creating a competitive market without being subject to the same standards and regulations and rules that the cannabis industry is,” noted Althoff, who likened the Delta-8 dilemma to the deadly vaping and synthetic marijuana crises that previously roiled the nationwide cannabis industry. 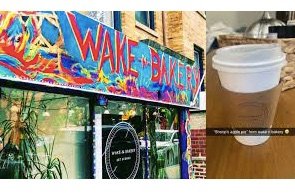