The Great British Bakeout….By All Accounts The Tea Party Was A Big Success.

With regard to our report yesterday this report from the Independent  details what a lovely afternoon everybody had in parliament square.

MPs and activists gathered outside Parliament for a “cannabis tea party” demanding the legalisation of the drug for medicinal purposes.

Organised by the United Patients Alliance, a group that hopes to legalise the drug for those suffering from chronic conditions, including multiple sclerosis (MS), the Labour MPs Paul Flynn and Tonia Antoniazzi appeared alongside the Liberal Democrat MP Layla Moran.

Despite the possession of cannabis currently carrying a maximum prison sentence of five years, activists smoked joints at the tea party just yards away from the House of Commons.

Mr Flynn added: “It’s political cowardice. They are afraid of being accused to going to pot. I’m afraid governments get brownie points for appearing to act tough.”

Clark French, a founder of United Patients Alliance, who was diagnosed with MS in 2010 during the final year of his degree at Reading University, said cannabis improves his symptoms of chronic pain, including spasms, fatigue, migraines and tremors.

“Cannabis helps me to have a much better quality of life than I get on the medications my doctor can prescribe me,” he said. “I think it is ridiculous that I can legally take opioids and chemotherapy based treatments which could kill me, but am criminalised for consuming cannabis despite the support of my neurologist, GP, MS nurse and wider health care team.

“The UK Government needs to act on the evidence which shows that cannabis has medicinal value and change the law immediately.”

Ms Moran, who told journalists gathered on College Green that one of her best friends had died of MS and detailed the pain they suffered as a result. She added: “IF there was anything that we can do to help them then I think this is a good thing”.

She said that while she did indulge in some drugs for recreational purposes while at university she no longer did, insisting she would not be consuming any of the cakes on sale at the event.

Another activist Alex Fraser, a 26-year-old who has Crohn’s disease since he was 19, said that he also used the drug to relieve his symptoms. “I have tried not smoking, and my symptoms always increase dramatically,” he said.

“My pain is worsened and I often can’t eat or sleep without severe discomfort,” he added. “I also have taken prescription meds, and have tried not taking those, and the difference is minimal. I can safely say that cannabis is the most effective treatment for my Chron’s disease that I’ve tried.

“I hope that with the help of the United Patients Alliance I can have safe, legal access to it as soon as possible.” 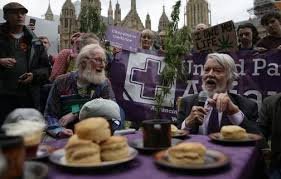