Santa Cruz de Tenerife, Oct 20. (EFE) .- The Los Verdes party has proposed this Tuesday that the Canary Islands make sustainable use of European funds, with tourism away from the mass model, promote the blue economy and renewable energies, create a technological pole in the islands and legalize the cultivation of cannabis.

The European funds for the recovery, of which Los Verdes estimates that they may correspond to the Canary Islands 3,600 million euros, should not be decided “in an office and under pressure from business interests exclusively”, but a debate in society is required , claim Los Verdes.

His spokesman, Ramón González, states that “it is not acceptable” to suggest that the aid be used for high-speed trains or “large destructive and unsustainable works, as the Government of the Canary Islands intends to do.”

They should be oriented to tourist rehabilitation, renewable energy, the blue economy, new technologies and food sovereignty, defends this party.

The pandemic has accelerated the process of the decline of the mass tourism model and the Canary Islands should seize the moment to stop being a subsidized colonial economy and move towards a “sustainable and thriving” economy.

In tourism “it will continue to be the true engine” of the Canarian economy, but that requires promoting the rehabilitation of the obsolete accommodation facility to adapt it to the new needs of sustainable tourism, according to Los Verdes.

It is about achieving energy self-consumption in tourist facilities within a framework of conservation of the territory, defends Ramón González.

Along these lines, Los Verdes propose an energy self-consumption project in all homes and neighboring communities where possible, which would ensure the creation of thousands of jobs and help achieve the objectives of the fight against climate change .

The blue economy is another of the initiatives that Los Verdes propose to promote, sustainably managing the resources provided by the sea and achieving “its own maritime waters”.

For the primary sector, they propose a food sovereignty law that allows orienting production to local demands and tourism.

Another of his proposals is that the Canary Islands follow the path of Canada and Uruguay and legalize the cultivation of cannabis, both for medicinal and recreational use, because on the islands “we have everything to be at the forefront of this crop.” EFE 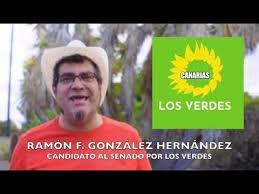