Two reasons why the UK should legalise cannabis

It has nearly been two years since the then home secretary, Sajid Javed, made the unprecedented move to legalise medical cannabis in the UK. However, fast forward to today and many argue that change in law has not helped. Despite it being legal, many legitimate patients are unable to access medical cannabis and even when they can, they must import it overseas and pay prohibitive prices.

As a result, many are calling for Boris Johnson’s government to go one step further and legalise cannabis in the UK.

Usually, one would not expect the Conservative party to be progressive in terms of cannabis reform. However, Boris Johnson is at his heart, socially liberal and was one of the first Conservative politicians to call for the legalisation of medicinal cannabis. Also, he has installed Blair Gibbs as a special advisor. Mr Gibbs has notably worked as the policy lead at the Centre for Medicinal Cannabis until 2018.

To help Mr Johnson, we have pulled together two reasons why the UK to legalise cannabis in the UK.

A Legal Cannabis industry could save the UK Economy.

Like the rest of the world, the UK is in trouble; the Covid-19 pandemic has utterly ravaged the UK economy. To support the job market, the UK government furloughed over 9.1million workers at an estimated cost of over £100bn. Furthermore, the UK GDP has plunged over 10% over the last three months. Also, for the first time since world war II, the UK debt is bigger than the country’s total output.

Many spectators have proposed that legalising cannabis could give the UK’s economy a much-needed boost.

The UK is a nation of potheads, and despite having a population of just 66 million, we get through over 5.2million ounces of cannabis a year. That is over 4 grams per year for every single adult in the UK. If this cannabis was purchased legally and taxed, it would add over £1bn in tax receipts to the UK treasury.

That £1bn can go a long way, for example it could pay for:

Furthermore, legal cannabis is believed to have the potential to create tens of thousands of brand new jobs. This is especially important because as a result of the COVID-19 pandemic, over 1.6 million adults are now claiming job-related benefits. This is a cost the UK can ill afford. In fact, the UK legal cannabis market is thriving. Cara Robinson, Head of CX at UK weed vaporizer shop Vape Elevate notes that “despite the pandemic, the industry is thriving as an increasing number turn to CBD related products for their reputed health benefits”.

Legalising cannabis would make the UK a safer place.

Despite what popular conservative media would have you believe, there has never been a death officially attributed the cannabis in the UK.

To put this into perspective, consider that over 7000 people a year die from alcohol poisoning in the UK and over 15% of all UK deaths are related to smoking tobacco. 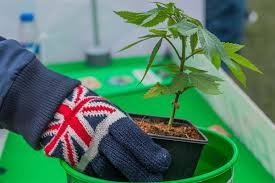