UC Berkeley study: Permitted cannabis farms do not use as much water as previously thought… Almond Farms Far Bigger Users

The Cannabis Research Center began researching water use on cannabis farms in 2017, shortly after cannabis was legalized for recreational use in California. Studies have focused on water use reports from farmers enrolled in the state’s cannabis cultivation program as well as anonymous farmer surveys.

“There is growing concern over the impacts of cannabis farms on the environment and water resources in particular, yet data on cultivation practices and water use patterns have been limited,” according to the study. “… The current study uses data reported by enrollees in California’s North Coast Regional Water Quality Control Board Cannabis Program to model how variation in cultivation practices and the use of stored water affect the timing and amount of water extracted from the environment.”

Natalynne DeLapp, executive director of the Humboldt County Growers Alliance, said the research coincided with what her organization has seen locally.

“It’s a really timely (study) given how important these conversations are right now,” she said. “I think some people have an idea that cannabis is a particularly thirsty plant and it’s never been true. Now that we’re a few years into legalization and have more data, it’s good to see that reflected in the academic research.”

“We’re approaching 8,000 legal cannabis farms in the state, including permitted indoor and outdoor growing facilities. But most farms statewide are not permitted,” Butsic said in a PPIC publication. “To give you a sense of scale, we estimate that Humboldt and Mendocino counties alone had around 15,000 illegal farms in 2018. Permitted farms tend to be much larger than unpermitted farms, so by area it’s probably not as extreme as the farm numbers alone indicate.”

Grantham noted that many legacy farms that were in operation prior to state legalization are still present, especially in the Emerald Triangle.

“Most of the state’s licensed growers are also in that area,” he said. ” … We are concerned about cannabis water use because many cannabis farms are in remote upper watersheds that support sensitive species. There’s naturally low water availability in these headwaters, especially in the dry season, so even small diversions can have an impact on the ecosystem.”

That being said, Butsic and Grantham said their research “hasn’t found cannabis to be particularly thirsty relative to other crops.”

“Legal outdoor production uses about the same amount of water as a crop like tomatoes,” Bustic said.

“Cannabis farms are considerably smaller than other crops — on average, about a quarter acre. So, cannabis has a very small footprint and accounts for just a fraction of the water used by California agriculture overall,” Grantham said. “We see more variability in cannabis water use than other crops, partly because cannabis has avoided the standardization of production methods that we find in large-scale agriculture.”

The average size of a cannabis farm in Humboldt County is half an acre whereas most other agricultural products are grown on hundreds or thousands of acres, DeLapp said.

“Add it all up and we’ve estimated that a single large almond farm in the Central Valley utilizes 33 times more water than all permitted Humboldt cannabis farms combined,” she said. “Another way to look at thirstiness is to consider how much output is produced by a single gallon of water. For other crops like tomatoes, lettuce or almonds, a gallon of water produces between a tenth of a cent to two cents of value in yield. For cannabis, a gallon of water produces nearly $7 worth of value. In that sense, cannabis is by far the most water-efficient agricultural product in California.”

The study notes that cannabis farmers depend on a variety of water sources for irrigation, including rivers and streams, springs, wells, municipal water and captured rainwater. Most permitted cannabis farms rely on groundwater wells to meet their water demands, including more than half of the permitted farms in Humboldt and Mendocino counties that use wells. 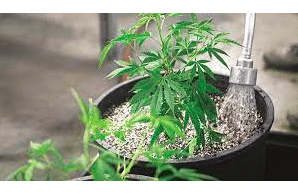