One of the UK’s largest hemp farms, Hempen, expects to lose about £200,000 of sales by destroying its crop after it says it lost its licence to grow it.

Last year, the Home Office said UK farmers could not harvest hemp flowers for cannabis oil, or CBD, but could continue to grow seed and stalk.

However, last Thursday the Home Office told the firm that it would have to cease production entirely.

The Home Office said it does not comment on individual licences.

Hempen’s licence is in the name of its director James Norman, who is the farm’s tenancy holder.

Hempen said it was being unfairly penalised and would appeal. It also criticised a “lack of clarity” in government regulation.

It instead focused its growing efforts on seed and stalk, which can be used to make cold-pressed seed oil and hemp flour among other products.

The not-for-profit business said it had then reapplied for its hemp grower’s licence – which it had held for three years – in December. However, last week it was rejected.

The farm says it started the destruction of its crop on Monday to remain within the law.

The company employs 12 people and also uses some casual staff. It hopes to avoid job losses by changing its product offering and continuing to supply CBD by importing it from a European partner, which is legal.

The plants are being cut down and crushed by a tractor over the farm’s 40 acres of hemp fields.

Hempen co-founder Patrick Gillett said: “In challenging economic times for British farmers, hemp is offering green shoots of hope as a rare crop that can pay for itself without subsidy.

“Instead of capitalising on the booming CBD industry, the Home Office’s bureaucracy is leading British farmers to destroy their own crops, and millions of pounds’ worth of CBD flowers are being left to rot in the fields.”

He added that he felt the Department for Environment, Food and Rural Affairs should take over responsibility of regulating farmers from the Home Office. 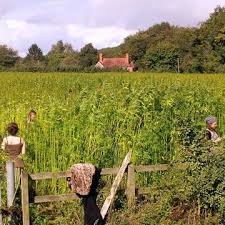