A man has been arrested after police intercepted a van full of cannabis plants that were being moved from a flooded house in the east Midlands.

The vehicle was stopped for speeding in Nottinghamshire on Sunday night by police, who found it packed with bin bags containing 25 mature cannabis plants with a total street value of more than £20,000.

Two men fled the vehicle and ran into nearby fields but the driver, a 26-year-old man, was detained nearby and arrested on suspicion of the production and supply of cannabis.

Plant and production equipment was seized during a subsequent search of a house in Worksop, where scores of residents were evacuated and more than 200 homes and businesses were flooded last Friday after a month’s worth of rain fell in 24 hours.

The cellar of the house in Market Street had flooded, and an illegally diverted electricity supply to an upstairs cannabis growing facility had become more dangerous. One remaining cannabis plant and growing equipment in the attic were seized.

Sgt Tony Rungay, of Nottinghamshire police, said: “What started as a relatively routine vehicle stop led to the discovery of a large quantity of drugs.

“The flooding has had a big impact on the town of Worksop, causing misery for a number of families who have had to leave their homes. However, it appears it has also had the impact of flushing out some criminal activity by halting some large-scale cannabis production.”

The man who was arrested was questioned and released pending further inquiries, according to police. 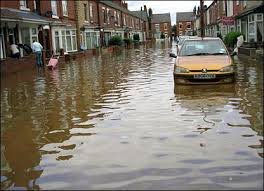