UK: Men had ‘vast’ amount of cannabis in their car but it was for their own use, court told

Two men caught with a ‘vast’ amount of cannabis and a set of scales in their car intended to use the drug themselves, a court was told.

Parminder Singh Moman and Dipesh Patel had a number of bags and plastic tubs of the class B drug when police searched them and the vehicle in a city street in January this year.

The pair, whose homes were also searched but nothing of note found, appeared at Leicester Magistrates’ Court to admit cannabis possession.

Prosecutor Neil Hollett told the court a Leicestershire Police patrol spotted the pair in the car and detected the smell of cannabis coming from it.

Officers told them they and the car were going to be searched, Mr Hollett said.

Initially, officers took a small bag of cannabis from 26-year-old Patel, who was in the passenger seat.

Next, they opened a Gucci bag which was placed in front of him in the footwell and discovered more cannabis.

After several more packages containing the drug were recovered, Moman, 23, told officers there was more under his seat.

Officers continued to search the car and found a ‘large amount’ of cannabis in the boot as well as two grinders which are used to prepare cannabis for smoking, Mr Hollett told the court.

“In light of the amount of cannabis which was found, an investigation was launched into whether the defendants should face more serious charges than possession for personal use,” Mr Hollett said.

“It is worth pointing out this is no normal case of possession of a small amount of cannabis,” he added.

No value for the drugs was read out in court.

Both men chose to appear without legal representation.

Momat, of Victoria Road North, in Northfields, Leicester, told the court he was one of the main breadwinners in his house and smoked cannabis to relieve stress.

Patel, of Fosse Road South, Westcotes, said he had smoked the drug to help with his depression. 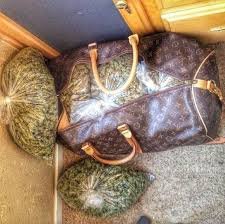