Health Europa report……….The paper released by Maple Tree Consultants and Mackrell.Solicitors is calling on the UK Government to review its restrictive approach to the country’s cannabis market, revealing the outdated laws and regulations that are hampering the growth of this multi-billion-pound industry.

The paper highlights that if red tape is reduced, the medical cannabis market could be worth £2bn, create 97,000 new jobs, and transform access for the estimated 1.4 million individuals currently sourcing cannabis illegally for medical reasons, who are in desperate need of affordable cannabis medicine.

The discussion paper is supported by sixteen industry heavyweights including Prohibition Partners and the Primary Care Cannabis Network.

To date, there has only been three NHS cannabis prescriptions since the medicine was made legally available in 2018. And, despite being one of the largest exporters of medical cannabis in the world, currently, the UK imports 100% of its cannabis medicine and most of its CBD products, due to the contradictory legislation on medical cannabis, and the convoluted licencing and regulatory processes required for businesses entering the space. Patients themselves have largely footed the bill for these issues, with most prescriptions paid for privately by patients and their families.

“The UK is a world leader with a global reputation in pharmaceuticals, so there is a strong argument that if we were able to both develop and export more cannabis-based medicines, we could continue to be a global heavyweight and increase our market share even further. The current situation has resulted in desperate patients, who even after being lucky enough to receive a medicinal cannabis prescription, face high costs and long waiting times. This is in turn leading to frustrated businesses, who are desperate to supply these domestic patients.”

Recommendations and findings on cannabis

The ten recommendations for creating a medical cannabis industry in the UK include:

The report found that production of the UK’s medicinal cannabis products is confined to one main grower – British Sugar – and one main producer – GW Pharmaceuticals. In 2018 the UK was supplying 44.9% of all medical cannabis, yet this relates almost solely to two products, Sativex and Epidiolex, which are not used by the UK’s domestic market.

It also found that most of the UK’s medicinal cannabis patients require full-spectrum products that cannot be produced in the UK due to the difficulty of obtaining a cultivator’s high-THC growing license from the Home Office, and, as of October 2019, there were just 19 extant licenses to cultivate high-THC cannabis in England, Wales, and Scotland, with many of these bring owned by GW Pharmaceuticals. This is a poor number, considering applications to the Home Office to grow cannabis for medical purposes have been open for several years.

Further findings include that the medical cannabis industry could be worth in excess of £2bn, if even half of the 1.4 million individuals currently sourcing cannabis illegally for medical reasons were to be granted a prescription, and, according to financial mapping of other regions that have legalised medical cannabis, the industry could generate over £360m per annum in tax revenue.

The report has found that the UK’s CBD market was worth £300m in 2019, but the great majority of CBD products come from foreign sources because, under UK law, the stalks of the hemp plant can be used for textiles and the seeds for food products, but its flowers and leaves – where most of the CBD resides – must be destroyed.

Furthermore, there is growing outcry from hemp farmers who argue that harvesting the CBD would take their yields from £400 per acre to an estimated £10,000, and the UK’s 900 hectares of hemp farmland could be worth over £22m per annum in revenue if the flowers were harvested for CBD.

Ricardo Geada, Partner and head of the Cannabis and Regulatory Team at Mackrell.Solicitors said: “The current regulatory landscape for medicinal cannabis is fraught with problems. The market could be worth billions of pounds and has the potential to revolutionise patient care and turbocharge the UK economy post-COVID. We hope the Government takes notice of our report’s findings and opens discussion on the necessary detail that lies behind the Recommendations we have presented.” 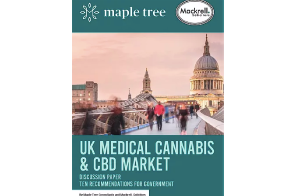