And for today’s you couldn’t make it up story we have care of News International in the UK this humdinger of a  revelation which isn’t so secret now.

A SCOTLAND Yard chief who devised the force’s drugs strategy has admitted using cannabis — but insists it is only for medical reasons.

He has been suspended from duty while he is investigated over allegations of drug misuse.

Commander Bennett reportedly refused to take a drug test ordered after a tip-off that he was using a controlled substance.

The veteran officer, who has 43 years of service, has now told professional standards investigators he uses cannabis for an unspecified health reason, The Sun can reveal.

Medical cannabis has been legally available on prescription since last November and the drug is often used by those who suffer from cancer, multiple sclerosis and epilepsy.

Low concentration cannabis oils and pills can be bought at pharmacies without prescription.

A source said: “The commander’s position is that he has not done anything wrong legally. He has said that he uses cannabis, but purely for medical reasons.”

He has presided over hearings leading to officers being dismissed for cannabis and was nicknamed “Sacker” due to the apparent high number fired.

The source added: “He has fired officers for using cannabis. He now accepts he uses the drug, albeit for medical reasons.” 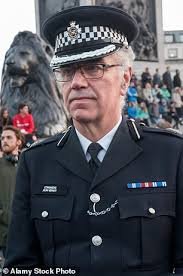