UK – Talking Drugs “Letter from the Editor: Laying the path for cannabis justice in the UK”

January was a strong start to the new year for Release. On our home front, we have launched our latest cannabis justice report: “Regulating Right, Repairing Wrongs: Exploring Equity and Social Justice Initiatives within UK Cannabis Reform” which is not one to miss if you haven’t seen it already. Based on Laura Garius and Amal Ali’s research into social and racial equity around cannabis law reform, the paper outlines 14 key principles to integrate into the future legal cannabis industry of the UK. We’ve been sharing the paper out far and wide with non-traditional audiences, those outside the drug policy world, in a bid to broaden the support for a more just and fairer future for British cannabis.

It’s concerning to have cannabis policy led by industry, which is something seen not just in the UK but across the world. The UK is a particularly insane example, where you have a country that is one of the largest medical cannabis exporters, has legalised medical cannabis almost four years ago now, and yet still only a handful of patients are able to access it on a public prescription. With the onus of evidence being on medical cannabis companies, a model of patented-medicine-only is being created, missing out on the benefits that cooperative distribution and home cultivation would enable.

The paper is important to be publicised and in every organisations’ hands, so that when the eventual regulation of cannabis happens, there can be no doubts on how to do it properly.

The paper was thankfully picked up by several high profile media outlets, including NME, i News, Justice Gap, Mixmag, and others. Really fantastic to have so much support already, which is looking like it will only continue to grow. 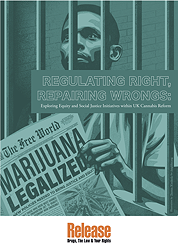 A call to ensure a just, fair, and equitable legal cannabis market in the UK

This report proposes 14 guiding social equity principles to be integrated into the UK’s future legally regulated cannabis market. This paper builds on Release’s national research on the disproportionate policing of ethnic minority individuals and other disadvantaged groups, and evaluates regulatory frameworks emerging in North America and beyond. It outlines an evidence-based roadmap to prioritise and protect those most vulnerable to the harms of prohibition in legal recreational markets, while still ensuring the benefits of cannabis legalisation and regulation for all.

Whilst countries across the globe – from the US to Canada, Uruguay to Germany – acknowledge the failure and damage of cannabis prohibition, the UK is left faltering behind. However, with over half of Britons, and nearly two-thirds in the capital, having already signalled their support for the legalisation of cannabis for recreational use, the reality is that cannabis reform in the UK is inevitable. The question is not when, but how cannabis will be regulated in the UK.

A number of US states, in particular New York and Massachusetts, have paved the way for a social and racial justice model of cannabis reform. Release present guiding principles in preparation for the eventual legal regulation of cannabis in the UK. These principles are designed to ensure that the same people who are locked up by punitive drug policies are not locked out of the legal market, and that cannabis reform is an opportunity to repair historic injustices caused by the war on drugs.

We are inviting organisations to register their support for our Regulating Right, Repairing Wrongs report, the 14 social equity principles, and the creation of a just, fair, and equitable cannabis market in the UK. As this is a civil society-driven initiative, we are primarily seeking support from charities and social enterprises. If your organisation would like to register, you can do this by sending your details via the ‘Register your support’ button below. You can see the list of current signatories at the bottom of this page.