The Guardian reports…..Two people have been arrested over an incident where 17 children at a north London school were taken to hospital after eating sweets thought to contain an active substance in cannabis.

Police were called by the London ambulance service at about 11.45am on Monday to La Sainte Union Catholic school in Highgate. As a precaution 17 pupils from the girls’ secondary were taken to hospital.

On Wednesday a 41-year-old man was arrested on suspicion of possession of cannabis and child neglect (exposure to harm). He was taken to a north London police station and released on bail.

On Thursday, a 24-year-old woman was also arrested on suspicion of possession of cannabis and child neglect (exposure to harm). She is currently in custody and the investigation continues.

The sweets were believed to have contained tetrahydrocannabinol, known as THC, an active substance in cannabis.

Initially, this was reported as 13 children but another four became unwell.

Their parents were informed. Nobody was found to be seriously ill. 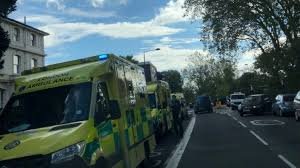