Ukraine may soon open Europe’s first center for hemp therapy. The industrial variety of Cannabis sativa, the drug-less brother of marijuana, has been used as a traditional source of fiber in Ukraine for ages. Now it may become a center for alternative cancer therapy – if Michel Tereshchenko, the mayor of the provincial city of Hlukhiv gets his way.

In Soviet years, Ukraine made a splash in the hemp industry with its Hemp breeding department at the Institute of Bast Crops in Hlukhiv which opened in 1932 and has been one of the world’s largest centers for developing new hemp varieties, focusing on improving fiber quality, yields, and diminishing the content of tetrahydrocannabinols, or THC, the psychoactive component of Cannabis sativa. In 2009 it created the world’s first and only non-narcotic varieties of hemp, and before that – the first varieties with insignificant amounts of THC.

It’s located in what was once the residence of Mykhailo Tereshchenko, a Ukrainian industrial magnate and philanthropist who lost everything after the Bolshevik revolution of 1917. Nowadays, his grandson Michel Tereshchenko, who returned from France to his ancestral homeland and landed a victory in Hlukhiv’s mayoral election, is seeking to breathe a second life into Ukrainian hemp. And into Ukraine’s cancer patients. His facebook post announcing that the center will open in three months, on time for the new harvest of hemp, and will look more like a beauty center than like a hospital, spread like wildfire and has attracted many potential investors – although it is too early to reveal their names, Mr. Tereshchenko says.

The science behind the idea

Although it’s too early to say that cannabis cures cancer, research in that direction is ongoing. Cannabis has been shown to kill cancer cells in the laboratory, and cannabis-derived drugs have been approved to use to relieve side effects of cancer treatment. The secret lies in cannabinoids, active chemicals in cannabis which activate cannabinoid receptors in the body, playing a role in immune system generation and re-generation. The main active cannabinoid in Cannabis is delta-9-THC. Another active cannabinoid is cannabidiol (CBD), which may relieve pain and lower inflammation without causing the “high” of delta-9-THC. Cannabinoids are plentiful in both hemp and cannabis, with hemp having lower concentrations of THC and higher concentrations of CBD.

According to the National Cancer Institute of the USA, cannabinoids may be useful in treating the side effects of cancer and cancer treatment, as well as providing other possible positive effects such as increasing anti-inflammatory activity, blocking malignant cell growth, preventing the growth of blood vessels that supply tumors, increasing antiviral activity, and relieving muscle spasms caused by multiple sclerosis. Exploring the further health effects of cannabinoids is a prospective research avenue. 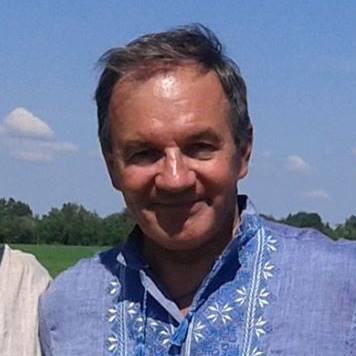 Since he became Mayor of Hlukhiv, Mr. Tereshchenko faced a long line of people ill with cancer asking for financial aid at his weekly reception. At best, the city could provide them with a one-time payment of $185 – peanuts compared to the prices patients need to pay for chemotherapy which they can’t afford. “Our help is insufficient and those people are ruined, hopeless, and stressed by very heavy medical treatments leaving them in a very distressed condition,” he shared with Euromaidan Press.

“So I reminded myself of the story of Cuba. When it was under US blockade in the 60’s and could not get medications from the West anymore, the Cuban doctors saw that they had ample supply of bees and beekeepers in Cuba, and developed apitherapy with success, using the natural properties of the inexpensive and abundant bee products: honey, propolis, bee venom, royal jelly,” Tereshchenko said, referring to the alternative medicine practice the efficacy of which is nowadays disputed.

Hlukhiv, he says, like all of Ukraine, today is in a position like Cuba: most Ukrainians don’t have the money for Western medications. “So why could we not try to build an efficient, human-friendly, inexpensive medicine based on our Hlukhiv non-narcotic hemp? That would be really needed by all those Hlukhivchani suffering from illnesses that they just cannot fight properly with traditional means of our heavy state medicine. This was the basic thinking at the origin of our initiative. It was taken by my team around the Hlukhiv City Hall.”

Tereshchenko’s objective is now to create an affordable, innovative and efficient therapy. Unlike similar existing experimental luxurious spa and relaxation centers in California, the envisioned facility will not aim to serve wealthy people but specialize in helping people with very limited material means, and it will be the first one of the kind in Europe. “We have to adapt this idea to our country Ukraine, and make it available for everyone,” Tereshchenko stated. A noble cause, considering that over 50% of Ukrainians now live beneath the poverty line, following the economic crisis resulting from the Russian-instigated conflict in Donbas. Israel To Allow Medical Cannabis Prescriptions For Some Conditions