The Ukraine Parliament has not passed bill 5596, which would provide patients with access to medical cannabis in Ukraine and regulate its circulation.

In total, 184 lawmakers voted in favor, while 33 voted against and 61 abstained. As a result, the bill was sent back for additional revision.

Earlier, the Ministry of Health encouraged Ukrainian lawmakers to adopt the bill to make cannabis available to patients suffering pain.

Olga Stefanyshyna, a lawmaker with the 20-member Voice faction, said that cannabis medication would come in pills, oils, sprays and patches, which cannot cause addiction.

“Nearly two million Ukrainians are in dire need of it. Among them are palliative and cancer patients, about 20 thousand children with severe epilepsy, war veterans with PTSD, patients with Parkinson’s and Alzheimer’s diseases, multiple sclerosis, psoriasis, and many others,” she wrote.

The question of medical cannabis was part of the president’s nationwide poll entitled “5 questions from President of Ukraine Volodymyr Zelensky” in 2020.

When asked whether they support the legalization of medical cannabis to relieve pain for the terminally ill, 64.88% of respondents said “yes” while 29.53% said “no.” 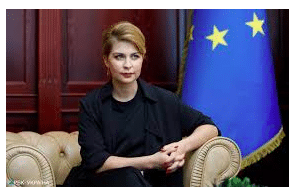