In the last ten years, Morocco has always been as a cannabis producer in the first position of the UN report. The Alawite country continues to be at the top of that ranking. From 35,000 to 38,000 tons are the production figures of the plant in Morocco “In 2017, about 35,000 tons of cannabis were produced in Morocco, most of which was converted into hashish.”

The UN report collects data from recent years and bases its ranking on it. Cannabis is produced or cultivated in more than 134 countries throughout the world. In 2017 alone, Morocco produced around 35,000 tons of which the vast majority were destined for the production of hashish. The groups grow cannabis to later produce hashish, then export it throughout Europe and many other regions of the world. Of course, this hashish produced in North Africa is very difficult for America to arrive.

There are about 50,000 hectares of land cultivated with the cannabis plant and for a large majority of hashish production. Of these, it is clear that in 2017 only 570 of these hectares destined for the cultivation of the plant were eradicated, there is no data on the eradicated units.

Another country that is also at the top of the report is the Latin American country of Paraguay, but in this case it is for eradicating cannabis plants, only in 2017, 36 million. In this peculiar ranking, the second country would be the Philippines with some 25 million plants eradicated in 2016. As a figure, the United States only eradicated 5 million plants, says the World Drug Report. 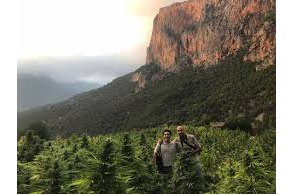