Oregon to decriminalize all illegal drugs in historic first, while voters in many states vote to abolish penalties for possession

On Tuesday night, a number of US states voted in favor of decriminalizing drugs in an unprecedented drug law overhaul. Thanks to a push by drug reform advocates, in every state where the ballot was proposed, people voted to abolish criminal penalties for possession.

In Oregon, all illegal drugs – including heroin, cocaine and methamphetamines – will be decriminalized, meanwhile psilocybin, or psychoactive mushrooms, will be legalized for therapeutic use – a historic first.

Oregon has with some of the highest substance use and mental health problems in the country, and its access to services is one of the worst in the country. It has the third highest number of people needing but not receiving treatment for alcohol and substance use disorders.

Mimicking successful pilots in Europe, the initiative in Oregon places an emphasis on treating addiction as a health issue, rather than one of law and order. Instead of jail time, those found in possession of drugs will have the option to either pay a $100 fine, or sign up for addiction services. 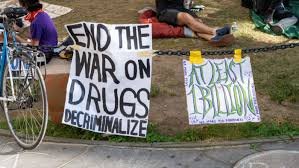