Brooklyn, N.Y.-based Green Angel CBD has filed a lawsuit against the city of New York and FedEx after police intercepted a hemp shipment the company never received.

In March, RDK NY, which does business as Green Angel CBD, and its owner Oren Levy and his brother Ronen Levy filed a lawsuit in a New York federal district court against the City of New York, at least two New York City police officers, FedEx and one of FedEx’s drivers. The complaint accuses the city and FedEx of being responsible for a missing shipment of hemp.

In 2019, Oren Levy had ordered 106 pounds of hemp products from Vermont-based Fox Holler Farms. The order included nine boxes with product valued at $17,000 total.  The Levys said they expected to make a profit of $60,000 to $100,000 through sales of that shipment at Green Angel CBD.

Due to being hospitalized, Oren Levy had the FedEx shipment redirected from being delivered to Green Angel CBD to his brother’s, Ronen Levy’s, residence in Brooklyn. However, Oren received a notification that the hemp shipment was seized by the Vermont Police Department. According to the complaint, FedEx and its truck driver notified state police of packages of illegal substances, such as marijuana, were being delivered to a residence in Brooklyn. Vermont police cleared the shipment, deeming the paperwork lawful and apologizing for the inconvenience.

However, FedEx then notified the city of New York of the hemp shipment. Several NYPD officers confiscated the nine packages after the FedEx driver delivered them to the precinct. Despite knowing that the packages contained legal hemp products and not marijuana, police refused to release the shipment to Oren Levy.

The lawsuit claims that Green Angel CBD and Oren Levy were deprived of their business and livelihood.

According to the lawsuit, Ronen Levy was arrested and held for about 24 hours when he went to the police station to inquire about the shipment.

Green Angel CBD is suing FedEx for negligence in making a false claim and surrendering the packages.

Additionally, the lawsuit claims the city of New York was negligent, reckless and careless “in creating a media spectacle of the confiscation” and carelessly publishing and publicizing “the incident on a variety of public platforms including but not limited to Facebook, Twitter and Instagram.”

Furthermore, Green Angel CBD claims that the city was negligent in hiring, training and retaining the officers involved. It alleges that the city had prior knowledge of the “inappropriate, unlawful and improper conduct” of the police officers and “continued to employ them and allowed them to be in contact with the public at large.” The complaint goes on to claim the city has a hiring practice that leads to the hiring of officers “lacking the intellectual capacity and moral fortitude to discharge their duties.” Quotas, the lawsuit alleges, encourage illegal stops, illegal searches, false arrests, the fabrication of evidence and perjury.

According to the New York Post, all charges were dropped and the packages were returned to the Levys.

Both New York City and FedEx deny allegations of wrongdoing. 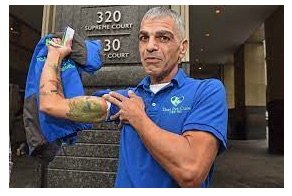