USA: Senate Democrat Announces Construction Of Only Hemp Seed Bank In The U.S.

Senate Minority Leader Chuck Schumer (D-NY) announced on Friday that work has begun on the creation of the nation’s only hemp seed bank.

The announcement comes months after $500,000 in funding for the project was included in a large-scale omnibus spending bill. The “Industrial Hemp Germplasm Repository” will be located at Cornell University’s AgriTech facility in Geneva, New York.

“When it comes to kicking Upstate New York’s burgeoning industrial hemp industry into an even higher gear, the Industrial Hemp Germplasm Repository is just what the doctor ordered,” Schumer said in a press release. “Not only will this facility act as the United States’ only industrial hemp seed bank, but it will also allow the world-class agricultural scientists at Cornell to help boost industrial hemp entrepreneurship.”

“I fought tooth and nail to secure this federal funding while also working to strip back the burdensome federal restrictions that held our farmers and growers back from being able to grow industrial hemp as an agricultural commodity because I knew the potential this crop had to transform the Upstate New York economy,” he said. “As work gets started at the Industrial Hemp Germplasm Repository, the seeds we have sown will soon be ready to harvest.”

Top Senate Democrat Announces Construction Of Only Hemp Seed Bank In The U.S. 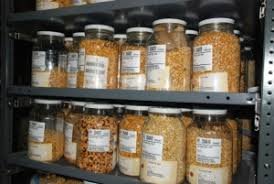