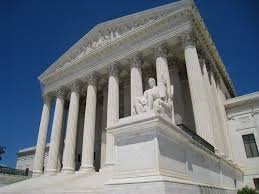 While marijuana advocates across the United States have been in a nail-biting frenzy ever since it was revealed that a lawsuit filed in the U.S. Supreme Court had the potential of shutting down the cannabis industry, the nation’s highest court announced on Monday it would dismiss a case submitted by Oklahoma and Nebraska suggesting that Colorado’s retail pot market had become a drug trafficking menace.

In the case of Nebraska and Oklahoma v. Colorado, the plaintiffs argued that Amendment 64, which ended pot prohibition in the Centennial State, was a flagrant violation of the Controlled Substances Act and the Supremacy Clause of the U.S. Constitution. The lawsuit claimed the two states were “suffering a direct and significant detrimental impact,” as a result of the Colorado cannabis trade, and it begged the U.S. Supreme Court to force its indefinite closure.

Even though most policy experts were unsure how the court would proceed in this case, the majority of the justices ruled in favor of a complete dismissal, putting the issue of statewide marijuana legalization in a position to never again be questioned in this manner by neighboring states.

“This is good news for legalization supporters,” Tom Angell of the Marijuana Majority told HIGH TIMES in a statement. “This case, if it went forward and the court ruled the wrong way, had the potential to roll back many of the gains our movement has achieved to date. And the notion of the Supreme Court standing in the way could have cast a dark shadow on the marijuana ballot measures voters will consider this November. But the justices correctly decided that this lawsuit is without merit and that states should be able to move forward with implementing voter-approved legalization laws even if their neighbors don’t like it.”

Conservative Justices Clarence Thomas and Samuel Alito were the only two who disputed the opinion, arguing that “the plaintiff states have made a reasonable case,” and therefore should be heard by the court.

In December 2015, U.S Solicitor General Donald Verrilli Jr. advised the Supreme Court not to entertain the lawsuit because it was not “an appropriate case for the exercise of this Court’s original jurisdiction.” Verrilli recommended the abandonment of the case since the issue at hand was the criminal actions conducted by individuals and not by the state of Colorado. It is not known how much this guidance had to do with today’s outcome.

“At the end of the day,” Angell explained,  “if officials in Nebraska and Oklahoma are upset about how much time and resources their police are spending on marijuana cases, as they said in their briefs, they should join Colorado in replacing prohibition with legalization. That will allow their criminal justice systems to focus on real crime, and it will generate revenue that can be used to pay for healthcare, education and public safety programs.”