A film producer who established a hemp farm to “pull carbon out of the atmosphere” has attacked UK laws that are holding back production of the biomaterial.

Architects are “desperate” to specify products made from the cannabis variety in their projects, said Steve Barron, who has converted a Cambridgeshire estate into an organic hemp farm and built a house from the plant.

But lack of research needed to approve the material for use in construction, plus drug laws that prevent much of the plant from being processed, are hampering the UK’s hemp industry, he said.

“We’ve probably had three or four hundred architects who have emailed us,” said Barron, who bought an abandoned wheat farm four years ago and turned it into hemp-producing Margent Farm.

“They’re desperate for a natural material and a carbon-zero way of building houses,” he said. “Everybody’s looking for it. The market’s definitely there but it needs deregulation.”

Barron, who directed seminal pop videos including Michael Jackson’s Billie-Jean, Dire Straits’ Money for Nothing and A-Ha’s Take On Me, used hemp from his fields to build his own house.

He embarked on the project to explore hemp’s potential both in the fight against climate change and as a high-performance, non-toxic construction material.

“The plan was to grow fibre hemp to sequester carbon from the atmosphere and use a fair amount of it to build the house,” Barron explained.

Flat House, described as “a groundbreaking, radically low embodied-carbon house,” was designed in collaboration with Practice Architecture while Cambridge University biomaterials researcher Darshil Shah advised on the production of the hemp materials.

The three-bedroom house “was designed with the aim of prototyping prefabricated sustainable hemp-based construction to be applied to larger scales of house construction,” the architects said.

Shah, who is senior researcher at the Centre for Natural Material Innovation at Cambridge, said that hemp is “even more effective than trees” at sequestering atmospheric carbon.

It absorbs between 8 to 15 tonnes of CO2 per hectare of cultivation per year compared to forests, which absorb between 2 and 6 tonnes.

In an interview with Dezeen, Shah said that fast-growing, carbon-negative hemp can be used to “replace fibreglass composites, aluminium and other materials in a range of applications.”

Barron’s house makes use of hempcrete, a non-load-bearing wall infill and insulation material made of the woody inner “shives” from hemp stems mixed with lime.

It is clad in a specially developed corrugated material made of a compressed mixture of hemp fibres and bio-resin.

“The house is pretty much made of hemp and it has locked in atmospheric carbon,” said Barron, who said it took 100 days to grow the hemp on eight acres, or 3.2 hectares, of land.

Barron is now working with a company in Devon to develop the corrugated panels and achieve certification for their use in construction. He is also producing hemp objects including trays and coasters and developing a range of cannabidiol (CBD) balms and oils made from hemp seeds.

However, UK production of hemp is controlled by the Drugs and Firearms Licencing Unit, which is a division of the Home Office, rather than the Department for Environment, Food & Rural Affairs (DEFRA), which oversees agriculture.

This is despite the fact that, unlike marijuana, industrial hemp contains very low levels of psychoactive THC. “If your company or organisation want to cultivate industrial hemp you need to apply for a controlled drugs domestic licence,” says the government’s website.

“It’s still being policed by the Home Office, which is pretty ridiculous actually,” said Barron. “If you’re going to get a license, you should go through DEFRA, who understand it.” 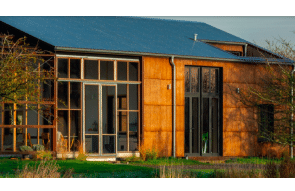