After the man recovered, the trooper asked, “Do you want to die over a minor misdemeanor?”

ROOTSTOWN, Ohio — An Ohio State Highway Patrol trooper successfully performed the Heimlich maneuver after a man allegedly attempted to swallow a bag of cannabis when he was pulled over for speeding.

Trooper Charles Hoskin conducted a traffic stop for a vehicle that was allegedly traveling at 94 mph in a 70-mph zone, according to NBC affiliate WKYC of Cleveland.

Don't try to swallow a bag of drugs prior to getting pulled over in an attempt to keep a trooper from finding them. Luckily, Tpr. Hoskin from our Ravenna Post was alert and able to assist the man who was choking on a bag of illegal marijuana. pic.twitter.com/LqgbOhOEsW 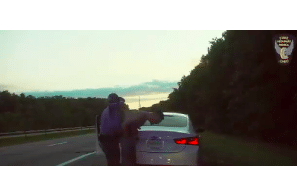