From The Spokesman Review..

Lab-created cannabis products made from hemp that have been surging in popularity are banned in Washington, a policy statement issued Wednesday by the state’s regulatory body said.

The initial response from the state’s Liquor and Cannabis Board to a question that has spread nationally over the past few months is merely advisory, regulators said, and is a precursor to a larger discussion about whether federal drug law applies to compounds derived from hemp.

The request to prohibit production and sale of “delta-8” products, named for the form of tetrahydrocannabinol (THC) that is dominant in them, came from licensed marijuana growers in the state who argued they were being forced out of the market by a cheaper product that should be banned under federal law.

The Washington Liquor and Cannabis Board said Thursday that, while the policy statement is “advisory only,” it would work with sellers and producers through a formal rulemaking process that will begin in mid-May.

At least one trade group representing marijuana businesses has asked the state’s Liquor and Cannabis Board to avoid such a sweeping action, arguing delta-8 products are popular among medical users and that the market shouldn’t be completely closed.

Delta-8 is created most often through lab-based extraction from hemp plants, which turns a chemical compound in the plant into a product that produces a less profound “high” than the THC in most cannabis products you’d buy at stores, “delta-9.” The names are derived from the chemical structures of the THC, which are similar but not identical.

Some have argued that delta-8 products, because they are derived from a crop that was legalized as part of the 2018 Farm Bill, are not prohibited under federal law. The availability of delta-8 products appeared to explode right after the November election, said Crystal Oliver, executive director of the Washington Sungrowers Industry Association, which advocates on behalf of outdoor cannabis farms in the state.

“I think the change in our president made people feel a little bit braver,” Oliver said.

That increased attention and demand has led at least six states to pursue legislative action or clarify existing laws outlawing the production and sale of delta-8-containing products, and producers have mostly refused to import their products into at least a dozen states over concerns of legal action, according to industry publication Leafly. That list includes Idaho and Montana.

The Washington Cannabusiness Association penned a letter to the Liquor and Cannabis Board in February requesting that the language of any policy statement not preclude the creation of delta-8 THC through “natural processes.”

“The focus should be on incorporating all things cannabis into the regulated system in a safe manner, this includes delta-8 THC,” wrote Vicki Christophersen, the association’s executive director, in a letter sent to the Liquor and Cannabis Board in late February. 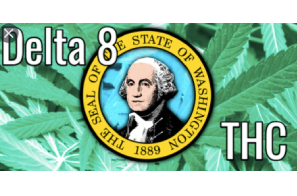