In March, New York Governor Andrew Cuomo signed legislation legalizing adult recreational use of marijuana. As soon as next year, New Yorkers 21 and over will be able to buy smokeable and edible forms of marijuana in retail stores. They’ll also be able to grow at home up to six cannabis plants per person, or 12 per household.

“There was a time it was in the 1800s when the country embraced drugs, morphine, cocaine and heroin were used as psychoactive medicines.” Zahnluter cited as examples Coca Cola, which originally contained cocaine, and a time when Bayer Aspirin marketed heroin. 29 states outlawed marijuana between 1916 and 1931. The 1936 movie “Reefer Madness” gave the drug a black eye, and it was effectively prohibited a year later.

“And they decided, as proponents of the 1937 Marijuana Act, that it was an effective propaganda tool, to use it to associate violence with Mexican minority communities.”

“Legal Aid Society did a study of people of color, who were arrested on marijuana charges in the year 2020 in New York City. 2020. So that’s 50 years after the enactment of this act, and 94% of those arrested for marijuana crimes under this act were our people of color.”
July 7, 2014 – Governor Cuomo Signs Bill to Establish Comprehensive Medical Marijuana ProgramCredit governor.ny.govEdit | Remove

“So what’s changing with the medical cannabis program with the new legislation? The Compassionate Care Act, which was signed in July of 2014, is repealed and being replaced. We have new medical conditions… There are new conditions that are added, as well as any condition recommended by a patient’s practitioner. So it really broadens the scope to help those patients who may be suffering from a condition where they’re looking for an alternative and also helping those prescribers and weighing the risks versus the benefits for their patients.”

Quackenbush adds that for patients, prohibitions on smoking and growing marijuana end with the new legislation.

Axel Bernabe, Assistant Counsel for Health to Governor Cuomo, expects retail marketing to give the state an economic push.

“You’re gonna have growers and processors and distributors, you’re gonna have, you know, cooperatives and micro businesses. Those are somewhat unique to the cannabis industry, and again, infused with social equity and social justice. What we’re trying to do on the micro business side, for example, is have small growers that would be able to do you know, maybe they’re already doing a list of grows, maybe they they’re familiar with, with the cannabis plant and want to try their hand at growing, but don’t have the capital to really build out a full grow facility, to be able to do a small grow, process and distribute and sell their own product. So there would be a special carved out license that could be vertically integrated in that way.”

Chris Alexander is Government Relations and Policy Manager for Village, a Multi-State Cannabis Company based in Canada.

“What we have in terms of our social economic equity program is really an MWBE program on steroids, essentially, where we’re really trying to target the folks who want to access the market. That includes people who have been impacted by prohibition, that includes people who live in communities that have been over policed. for marijuana possession offenses, that includes you know, social and economically disadvantaged farmers who are struggling to keep, you know, products flowing and keep their industry alive.” 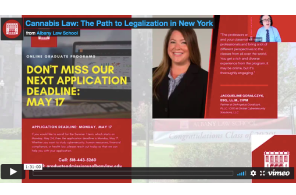