Weed and mental health – everything you should know

The cannabis plant contains more than 500 identified chemical constituents. More than 100 of them are cannabinoids. Medical marijuana uses the cannabis plant or its basic chemicals to treat a whole bunch of different diseases and conditions. Delta-9-tetrahydrocannabinol (THC) and cannabidiol (CBD) are the main chemicals used in medicine.

When cannabinoids enter the human body, they start interacting with the endocannabinoid system which is the network of cell receptors throughout the brain and body. Different permutations and combinations of cannabis dosages can affect many physiological and psychological processes, such as gastrointestinal function, appetite, pain, memory, immunity, inflammation, and mental health.

Unfortunately, scientific research of cannabinoids has been stunted in the United States by prohibition or restrictive regulations. As a result, the literature on the subject is patchy and inconsistent. The current evidence says marijuana may be both good and bad.

The Relationship Between Medical Cannabis and Mental Disorders

For now, research shows mixed results, depending on the nature of the mental disorder in question. What you should know about dangers of using marijuana is this: the successful use of medical marijuana in treating mental disorders depends on what chemicals in cannabis are prevalent. Let’s talk more in detail about this.

Treating depression with medical cannabis has been studied more than any other mental health use for marijuana. Studies carried out in the eighties and nineties showed a negative association between marijuana use and depression. It was considered that depression was increased by the use of cannabis.

In the 21-st century, many studies have revealed a positive association and disproved the misconception. When depression is the only mental health disorder in question, THC eases the symptoms.

There also were studies that showed no link between marijuana and depression. Such different results impel us on the thought that there are other important factors in treating depression.

Cannabis users with anxiety commonly report that 3% THC cannabis makes them feel more relaxed. In fact, THC consumed at low doses (7.5 mg) tends to increase anxiety, but it can exacerbate stress at higher doses (12.5 mg). CBD has shown anxiolytic properties, which means that it can alleviate anxiety symptoms.

So, here’s what you should know about the dangers of using marijuana if you want to use it to treat anxiety. Pay attention to the main chemicals present in the cannabis product you use. Choose the product that has higher levels of CBD and lower levels of THC. Note that effectiveness is based on the dosage amount. Determine your ideal dose, and your anxiety disorder will be positively alleviated with marijuana use.

Marijuana is the most widely used illicit substance for treating bipolar I disorder. Users report a feeling of relief of both depression (due to the THC) and the anxiety of mania (due to CBD).

Studies also found that cannabis use improves cognitive functioning (increases focus) which is needed in manic episodes in particular. So, bipolar disorder is showing a great deal of promise for the use of medical marijuana.

The dual nature of bipolar disorder requires two or more prescriptions in many cases. It’s vital to stick to the doctor’s guidance in order to avoid the abuse that may not only worsen the symptoms but also lead to addiction and create the need for marijuana addiction help.

The research on marijuana and schizophrenia is still very scarce. It is considered that cannabis enhances the risk of developing schizophrenia in individuals who have a predisposition for it.

One small study found that cannabis use disorder occurs in up to 42% of patients with schizophrenia and it substantially worsens disease progression. Why? For schizophrenics, the high THC containing products are dangerous as THC is known to increase the symptoms of psychosis.

When it comes to CBD, it shows promise as a potential new treatment for schizophrenia. Scientists from the University of Cologne in Germany conducted a small comparative study and concluded that CBD can be an effective antipsychotic medication with little to no side effects.

Patients with PTSD claim that marijuana use helps alleviate their symptoms. It can be explained by the fact that cannabinoids stimulate receptors in the endocannabinoid system that is involved in the extinction of aversive memories. Still, the data is quite superficial.

The Possibility of Developing Addiction

Whether people use cannabis for medical purposes or they are looking for “high”, the most common question they discuss is this – “Is weed addictive?”

In the U.S., marijuana is classified as a Schedule 1 controlled substance. The most dangerous illegal drugs, such as heroin, LSD, and ecstasy also fall into this group. According to the 1970 Controlled Substance Act, marijuana has a high potential for abuse and a lack of accepted safety use under medical supervision.

Marijuana advocates find it incorrect that something as promising as marijuana is being discredited due to inappropriate use. But the plain fact is that about 30 percent of those who use cannabis may have some degree of use disorder. With time, it may develop into an addiction.

The psychological symptoms of weed addiction include smoking it as a crutch, using it every day, and ignoring its negative effects on their lives. In this case, it’s vital to find marijuana addiction help.

If you are using medical marijuana, follow doctor’s recommendations, avoid taking higher doses, and the chances of use disorder and addiction will be minimal. Proper moderate use may help you with your condition without causing any serious side-effects. Doing it right, you’ll be able to answer “No” for the question “Is weed addictive?

It may take years before we gain a sufficient understanding of the benefits and drawbacks of medical marijuana for mental disorders. Until then, you can try it as long as you feel comfortable doing so. Anyway, it’s mandatory to consult a medical or mental health professional before using any controversial treatment. 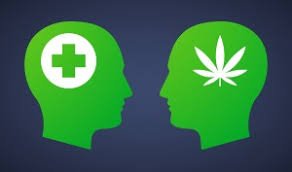