Weedmaps Article: Why THCV Might be the Next Big Thing in Weed

2019 has the potential to be remembered as the year when minor cannabinoids really hit the scene. While it’s true that the cannabis market is generally interested in tetrahydrocannabinol (THC), the intoxicating cannabinoid that most marijuana consumers have come to know and love; as well as cannabidiol (CBD); but cannabinoids such as cannabinol (CBN), tetrahydrocannabinolic acid (THCA), along with cannabigerol (CBG) have started to attract attention on their own.

One minor cannabinoid that appears to be gaining attention is tetrahydrocannabivarin (THCV). THCV is an analog of THC, but produces a completely different buzz than its intoxicating counterpart. It is also found in trace amounts in marijuana, so the effects are likely attributed to more prominent cannabinoids.

While more research is done for potential health benefits of this trace cannabinoid, THCV-focused products are starting to emerge on the cannabis market.

What Science Says About THCV

Like CBD and THC, this cannabinoid is initially produced by the cannabis plant in its precursor acidic form of tetrahydrocannabivarin acid (THCVA). Cannabigerovarinic acid (CBGV), a central precursor, converts to THCVA, which itself eventually converts into THCV when exposed to heat, or light.

Under a microscope, there’s not much distinguishing THCV and THC, as both share a similar molecular structure, according to Itzhak Kurek, Ph.D., CEO and co-founder of Cannformatics, a Northern California biotech company that uses bioinformatics (a combination of biology, mathematics, engineering, and computer science, among other fields) to improve medical cannabis science.

Despite sharing a similar molecular composition with THC, existing evidence suggests that THCV interacts with the CB1 and CB2 receptors in the endocannabinoid system (ECS) in an entirely different way. In one 2018 review, published in Molecular Biology, it was described as an “anomaly” of the cannabis plant, said to be the only known phytocannabinoid that acts as an antagonist of the CB1 receptors.

“Like THC, THCV binds strongly to the CB1 [receptors in the central nervous system] and CB2 receptors [found on immune cells], but THCV has a different effect than THC and does not produce the ‘THC-like high’ effect,” Kurek said.

In fact, research shows that THCV could act as an antagonist against THC, at least in certain cases. A 2015 study published in Sage’s Journal of Psychopharmacology, for instance, found that low doses of THCV inhibited the intoxicating effects of THC. At higher doses, however, the effects of this cannabinoid suddenly became more comparable to THC.

While researchers continue to unearth new information, THCV has demonstrated a potential for the following:

How is THCV Used by the Cannabis Industry?

While THCV could be beneficial for several health-related conditions, the cannabinoid has yet to receive the attention that THC and CBD have amassed.

One reason is the difficulty in obtaining THCV. While most strains contain high levels of THC or CBD, the levels of THCV are significantly lower.

THCV-rich cultivars can be hard to come by, as most strains contain zero or trace amounts. According to Steep Hill, a U.S.-based cannabis science and technology company, classic varieties of African origin tend to have notable levels of THCV, such as Durban Poison, which has upwards of 0.5% THCV. The cannabis lab also found that rarer strains such as Pineapple Purps have been said to contain significantly higher levels of it, in this specific case about 4%. In other words, currently, there are not many strains that produce significant levels of this minor cannabinoid, creating a market gap and an opportunity.

“In general, any natural compound produced in the plant in low concentrations will be cost-prohibitive due to the low yield recovered during the extraction process,” Kurek explained. “This suggests to opportunity for a breeding program to create THCV-dominant plants.”

Why THCV Might be the Next Big Thing in Weed 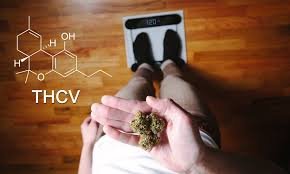