A police pooch nabbed a man allegedly in possession of a large amount of magic mushrooms after just 10 minutes of sniffing.

Earlier this month, police were at the Mandurah train station with drug detection dog, Henry, – a member of the Canine Unit.

Mandurah Police senior Sgt Neville Beard said within 10 minutes, Henry, caught a 25-year-old man who allegedly had nearly 400 grams of magic mushrooms, as well as a small amount of cannabis and a smoking implement.

Snr Sgt Beard said the man would be charged with possession of a prohibited drug (psilocybin), which is a compound in the mushrooms.

Police who arrested the man are determining whether or not he will be charged with possession with intent to sell or supply, due to the amount.

Snr Sgt Beard said detection dogs had senses so sharp that they did not need to be directed at particular people in public areas.

“They are trained to detect illegal narcotics and can detect the scent from a considerable distance,” he said.

“Once the dog indicates to the handler that he has detected narcotics on someone police then have the power to reasonably suspect a person is in possession of drugs and are authorised to conduct a search of the person.

“In these operations police do not line members of the public up and subject them to an inspection by the drug detection dog, because their ability to pick up illegal narcotics is so good, they just remain passive in an open public area like a train station and can sniff out drugs from a distance without having to approach someone.”

Snr Sgt Beard said dogs would be used for these sorts of investigations in the Mandurah area in “any place, at any time.” 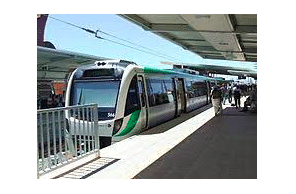