What Could the Biden Administration Mean for Cannabis Banking?

Now that the 2020 election is largely behind us and a new president prepares to enter the White House, what should cannabis entrepreneurs and bankers alike expect from the new administration? Are the winds of change coming to 1600 Pennsylvania Avenue, or will we just get more of the same prohibition-era policies?

While there is reason to be hopeful, it is not so simple as electing a new president for the cannabis legalization movement to attain its goals. Instead, it will take a concerted effort of the legislative and executive branches, spurred on by the vocal advocates who have fought for hard-won successes for decades, to see any meaningful cannabis reform during the Biden administration.

Will a Biden administration be cannabis-friendly?

The inauguration of Joseph R. Biden Jr. on January 20th, 2021 will not see a cannabis advocate enter the White House. Biden now supports decriminalization of cannabis, but previously sponsored the 1994 Crime Bill, which increase incarceration sentences, including as part of the War on Drugs. That “tough-on-crime” background suggested to some cannabis advocates that Biden would not be particularly enthusiastic toward the prospect of cannabis legalization.

While Biden may not be an enthusiastic cannabis legalization supporter, he will not be an enemy of the movement, either. If he is sent a bill from Congress, we could probably expect him to sign it, especially considering his vice president-elect Kamala Harris vocally supported cannabis legalization throughout the campaign. Harris also sponsored the Marijuana Opportunity, Reinvestment, and Expungement (MORE) Act, which would effectively federally legalize cannabis. However, Harris previously opposed legalization of cannabis when she served as Attorney General of California.

What cannabis bills might Biden be sent for signature during his first year in office?

The Biden Administration’s appetite for cannabis reform is of particular import, however, because Congress has been relatively active in advancing cannabis legislation – at least relative to the past.

The Secure and Fair Enforcement (SAFE) of Banking Act made history as the first cannabis reform measure to make it through a floor vote in the House of Representatives. The measure succeeded overwhelmingly in a vote of 321 to 103. It has since stalled in the Senate but could gain steam in a new Congress.

The MORE Act became the second reform measure to pass a House vote on December 4th, 2020, when 228 representatives supported the bill against 164 in opposition. The MORE Act is a significant piece of legislation that would effectively end federal cannabis prohibition by descheduling cannabis from the U.S. Controlled Substances Act (CSA).

Of course, these two bills would need to make it through the Senate before arriving on the president’s desk. Still, Capitol Hill has demonstrated that it is interested in taking up the issue of cannabis reform. And it’s not going away.

Other notable bills making their way through the legislative branch include the Strengthening the Tenth Amendment Through Entrusting States (STATES) Act would codify states’ rights to legalize and regulate cannabis industries without threat of federal interference. While this wouldn’t end cannabis prohibition federally, it would prevent future administrations from trying to enforce federal prohibition of cannabis against state-compliant cannabis businesses.

On the federal level, the U.S. is closer than ever to seeing any meaningful cannabis legislation. This makes the incoming administration’s attitude toward cannabis matters more important than it has in prior administrations.

Of course, this only matters if the president-elect is sent a legalization bill in the first place. In this regard, the dynamics of Congress matter much more than who resides in the White House. So, let’s break down the Congressional landscape:

The way these scenarios play out and whether Congressional Democrats have the political capital to push a cannabis legalization effort across the line will determine whether we see cannabis descheduled from the CSA in 2021.

What would cannabis legalization mean for cannabis banking?

These are all positive indicators for cannabis legalization hopes. But what would federal descheduling of cannabis mean for banking? Unfortunately, and surprisingly, the picture is not so rosy.

Although “marijuana” is still federally illegal, there is a fairly clear set of regulations surrounding the banking of state-compliant cannabis businesses. A lot of it has to do with ensuring there is no money laundering occurring and that state-legal cannabis profits aren’t comingled with illicit funds associated with illegal activity.

Banks are required to submit Suspicious Activity Reports (SAR) to the Financial Crimes Enforcement Network (FinCEN) for all state-licensed dispensaries, cultivators and manufacturers, and the due diligence and record-keeping associated with banking cannabis clients is much like other high-risk industries, like firearms or check cashing businesses.

Hemp and CBD banking is already in disarray

On the other side of the street is hemp and hemp derived Cannabidiol (CBD), in particular. Although CBD is technically legal, the U.S. Food and Drug Administration (FDA) has failed to clarify the regulations around these products intended for human and animal consumption. While it’s clear that CBD brands are not permitted to make health claims about their products, little else has been established.

This leaves bankers in a difficult position. Without clear regulatory guidance, they are in murky waters regarding their own liability and exposure when banking CBD clients. As a result, the handful of banks that do work with CBD clients have focused primarily on product quality and compliance with the 0.3% THC threshold.

With these two parallel regulatory frameworks regarding cannabis banking, descheduling would create serious chaos. If cannabis were federally descheduled, it would mean all the work done on CBD banking would be largely irrelevant and the 0.3% THC threshold could be thrown out the window.

In the short term, this would mean a scramble to reconcile CBD banking regulations with the newly developed cannabis banking regulations, which would no longer be primarily focused on anti-money laundering but rather product quality and compliance. It would essentially become a game of 3D chess to synchronize these currently separate systems, possibly disrupting the cannabis banking sector for some time. 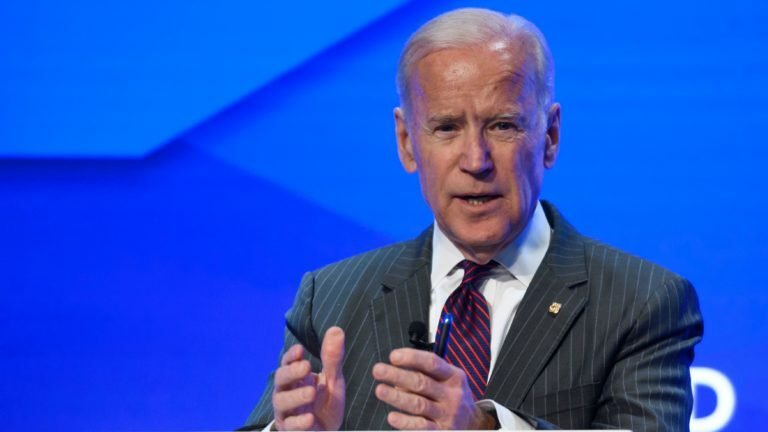 US Vice President Joe Biden delivers remarks on the Cancer Moonshot during a special session on the eve of the opening day of the World Economic Forum, on January 16, 2017 in Davos.
Inequality will be among the issues topping the agenda as the world’s political and business elite meet in Davos from Tuesday until Friday, when 3,000 people will gather for the annual meeting of the World Economic Forum. / AFP / FABRICE COFFRINI (Photo credit should read FABRICE COFFRINI/AFP/Getty Images)

Unfortunately, these growing pains are inevitable, and while it might throw some things out of whack for some time it might be better to get it out of the way now instead of three years down the line, when the separate regulatory frameworks surrounding cannabis and CBD become codified and further entrenched.

Then, it might become even more difficult to undo and revise these regulations. When it comes to the chaos on the horizon, perhaps it is best to rip off the band-aid and get it over with. On the other side is a more stable and straightforward cannabis industry – ideally, one with full access to banking and financial services.

In the end, it’s not all about the president

The president’s attitude toward cannabis and legalization is naturally important, but it is not the sole consideration. The legislative branch is the key. As we’ve seen with the SAFE Banking Act, it takes just one chamber (or even just one individual in the right position) to prevent the passage of legislation. No matter how friendly the president is to cannabis, failure to advance Congressional legislation means failure to achieve legalization. As the new government prepares to take office and begin a new session in 2021, there are reasons to be hopeful. But if legalization advocates want the stars to align, they need to remain vocal.

As for the cannabis banking situation, growing pains are coming – the question is simply how soon. Rescheduling cannabis in 2021 might not be enjoyable from a banking perspective, but it would result in a clearer set of regulations sooner, leading to a more stable industry and a clear set of rules for bankers to follow. That certainty would undeniably expand access to banking and financial services for cannabis businesses, a long-awaited necessity that could help the industry grow to new heights.