Article: At Least We Now Know Why Weedmaps Didn’t Want to Get Rid of the Illegal Listings on Their Website

Anybody following weedmaps will know this already.

That said this is well worth a read and illustrates the chinks in the armour, so to speak, which are, bigger than most thought 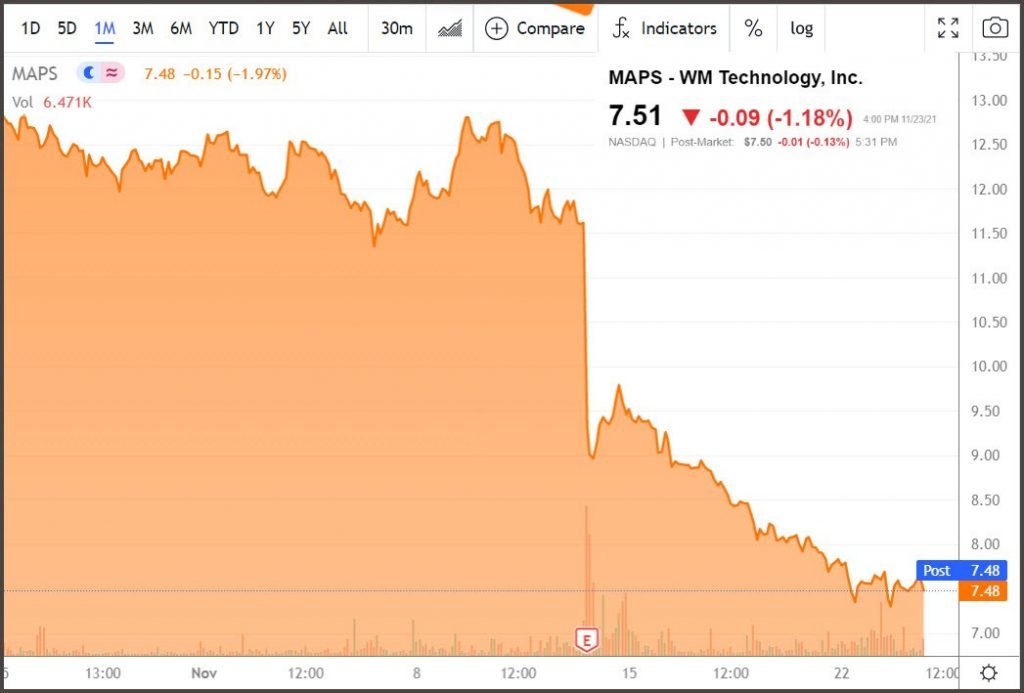 Weedmaps fought hard to keep the unlicensed retailers on their site for as long as they could, now we know why.

Weedmaps, or now known as WM Technology on Wall Street, had a horrendous stretch of bad news and dismal financial reporting over the past few weeks. Their stock price is down almost 58% since the end of June, and they gave weak forward guidance on the next quarter. Chris Beals, a former SPAC attorney who is now the CEO of Weedmaps, explained that it is the illegal cannabis market that is just killing their financial numbers. Beals said on his 3rd quarter earnings call:

While licenses continue to be issued across our end markets, licensed density is not where it needs to be in the pace of license issuance remained sluggish, which is contributing to a thriving illicit market. And further, there has been a lot written in the press about how producers are dealing with the current supply glut, by in some cases diverting products to unlicensed market channels at significant price discounts, which is only further fueling the consumer demand shift.

California, which is our largest market at just over 60% of revenue have lower end market retail sales in Q3 versus Q2 of this year. We believe that deceleration was a result of consumer demand shifting from licensed to non-licensed channels as producers, offloaded excess inventory to deal with the supply glut, resulting in significant price differentials between licensed versus non-licensed channels.

So Weedmaps is saying the illicit cannabis market of California, which as a state is 60% of their revenue, is killing their revenue and margins. For example, it was mentioned that their software business and SaaS models they offer to legal dispensaries for menu management, order processing, and compliance has gross margins of 96%. The problem is that the illicit market in California does not use WM technologies anymore.

Anymore, what do you mean?

Rewind the film just a few years ago and Weedmaps was a thriving private company, actually the most successful cannabis company in the world with over $480 million revenue while claiming they have never sold cannabis directly or touched the plant. They made their massive war chest by selling listings on their weed map. Generating massive amounts of traffic and being the “only game in town” at that point to find a dispensary (No offense, Leafly), they were able to charge massive sums to be the #1 listed dispensary in Los Angeles or San Francisco for example. Rumor had it that the top spot for Los Angeles was around $25,000 a month, #2 was $22,000, #3 #20,000, and on down the line. When someone dropped out of line, the sales crew at Weedmaps would pick up the phone and upsell the next dispensary in line to move up.

But wait, there could not have been that many legal dispensaries up and running 4 or 5 years ago to make that kind of money?

Exactly, so Weedmaps would list just about anyone that was willing to pay their fees and was selling weed. It did not matter if they had a license from the State of California or not, as long as you could pay, you were listed and mapped for consumers to find. That is how those totals could get so high on the map, illegal operators not paying taxes or licensing fees can spend all that money on their Weedmaps listing, instead.

The good times could not last forever for Weedmaps, especially if they wanted to go public, which they did in a SPAC transaction. The state of California told Weedmaps to remove any unlicensed business from their site. Weedmaps refused, citing the now famous section 230 of the Communications Decency Act, the same defense Facebook and other social media platforms use in defense of free speech and having to moderate information appearing on their site. The trouble was that Weedmaps was not a social media platform, and these weren’t free, independent users creating their own content, they were paying advertisers.

The state of California was not a fan of Weedmaps’ refusal to take down unlicensed growers and sellers, and threated to impose fines on the California company, then known as Ghost Group. The kicker was that the fines could be retroactive, so Weedmaps was theoretically looking at fines of $6.2 billion and possible federal drug trafficking and RICO ACT violations.

More storm clouds were moving in as Weedmaps was under Federal investigation and had Federal subpoenas issued in regards to their business practices and some of the companies listed on their website. These were all very worrisome for a company trying to go public and raise funds. Full disclosure, Weedmaps did announce on the previous earnings call that the Federal subpoenas have been dropped and there are no further Federal investigations into their business as of now.

Weedmaps eventually had to acquiesce to the state of California, with maybe some pressure from the Federal government, and removed all unlicensed operators from their platform. At the time, the industry wondered why they didn’t just agree to take illegal listings down in the first place since it was inevitable they would have to do it, especially if they wanted to go public and get listed on a pubic stock exchange. The obvious answer was money. They were making millions off those illegal listings. Weedmaps stalled and fought as long as they could in order to try and keep unlicensed listings on the map and paying for map placement and rank as long as possible

Jump Back to Present Day

It turns out based on the most recently earnings call that the group of unlicensed growers and sellers listed on Weedmaps that helped make them so much money, was now currently missing from WM Technologies earnings numbers. Weedmaps also had to remove illegal listings in Canada and agreed to the new Canadian government’s rules on legal marijuana shops and advertising.

Chris Beals, CEO of Weedmaps, confirmed what the industry thought, that the massive amount of money Weedmaps made from illegal growers and sellers in the past, is now killing them in the present, as in, not having them on their map and paying for listings. California was cited by Beals as being a big reason the numbers slumping. It is no wonder to anyone anymore as to why Weedmaps fought the Feds and the state of California to keep those unlicensed listings on the map as long as they could, because it made them a ton of money. The other news that caused a dramatic price drop was the curious case of Weedmaps finding themselves in a position of a “negative equity balance” due to recent combinations of businesses under the SPAC. WM had to issue more shares in a secondary offering that the market did not price into their current float. The shares were down 20% on the day of the announcement as the secondary offering would be dilutive to current shareholders.

The karmic fate of Weedmaps’ illegal listings can’t be understated, especially in their earnings call. Live by the sword, die by the sword as they say. Those unlicensed listings made them hundreds of millions of dollars as a private company, but now that they are public and can no longer list unlicensed cannabis companies in the US or Canada, there is a big hole in their financial numbers.

Their recent announcement of starting a marijuana social network with rapper and Cookies’ founder Berner has not stopped the current stock price slide. The marijuana industry road is littered with attempted cannabis social networks that are now defunct, such as Massroots, Social High, and a variety of weed named apps.

It will be interesting to see if the Weedmaps stock continues to slide in the near future as there are just not enough legal dispensaries coming online fast enough to make their estimates work, and with their first lock-up period coming undone in December, many insiders may decide to sell and get some real profits on their paper options in the company.

While a monster in the industry, the pressure is mounting on Weedmaps from the likes of Google, who now list legal dispensaries on their map, and the likes of delivery services like EAZE, who allow the consumer to bypass the Weedmaps experience. Weedmaps may have to re-create themselves in order to justify their still lofty price tag. Buying dispensaries or an MSO may be their best move like EAZE did, but then they would have their own stores in direct competition with their customers who are paying their monthly software fees. Beals has gone record saying he has no interest in doing this, but time and revenue pressure may force him to rethink this strategy.