Not a headline you’d normally expect to see in Defense News!

FLORENCE, Italy — In a bid to become self-sufficient in the field of legal, medical cannabis, Italy is growing plants using secret nutrients in ultra-clean rooms managed with military precision.

No wonder it called in the Army to handle the task.

Next year, the Italian service plans to produce 700 kilograms (1,543 pounds) of top-grade cannabis to cover nearly half of the 1,500 kilograms (3,307 pounds) required annually in the country for those in need of pain relief, such as people with cancer or Parkinson’s disease.

“The next step is self-sufficiency — that’s our ambition,” said Nicola Latorre, who leads the Italian Defence Industries Agency, which oversees the operation. The agency, which is an arm of the Defence Ministry, handles the commercialization of the state’s defense enterprises.

Cannabis the Army cannot yet grow is imported from Holland, Canada, Denmark and Germany, but production is ramping up at an anonymous-looking Army facility on the edge of Florence.

“What we can do in Florence is produce a highly standardized product so the dosage is unvaried, at the same price as we are now paying for imports,” said Col. Gabriele Picchioni, the head of the facility.

Launched in 2014, the Florence-based operation managed 50 kilograms in 2020 before rising to 300 kilograms in 2022. The increase was achieved thanks to more growing rooms — up from two in 2016 to 10 today — with six harvests a year in each of six flowering rooms, which host between 50 and 125 plants each.

To reach 700 kilograms next year, technicians are perfecting lighting, watering, temperature and ventilation, and they are using a blend of secret nutrients developed in-house that are mixed in with the hydroponic irrigation.

Also in 2023, the lab aims to produce cannabis-infused olive oil, which users can take in drop form, Latorre said.

He added that five private firms are set to supply more mother plants, from which cuttings can be taken to grow the plants in Florence. However, the main operation will not be farmed out to the private sector, he explained. “The state will continue to do this to guarantee quality and price.”

Why is the Army in charge?

The Army was handed the role of Italy’s legal pot supplier for two reasons, officials have said: to produce cannabis at a secure facility, and because the armed service has been in the pharmaceutical business for decades, turning out chemical warfare antidotes and malaria pills for soldiers.

The Army also manufactures so-called orphan drugs — medicines for rare diseases or conditions that big companies ignore because of the low production rates. The service currently makes four such drugs to supply 3,000 people in Italy.

As cannabis production ramps up, the Army has registered two types of marijuana it harvests as brands: FM1 and FM2, which stand for “Farmaceutico Militare” (or “Military Pharmaceutical” in English). Each contains a different level of tetrahydrocannabinol, the compound that gives pot its high.

“COVID made us see how public health is tied to the defense of the country and its security,” he said. 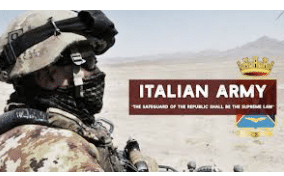