Antwerp, BELGIUM – Belgium is expected to announce Tuesday a new annual record for cocaine seizures at its port of Antwerp, likely over 100 tonnes, amid ever more aggressive activity by drug cartels.

The ports in Antwerp and nearby Rotterdam in the Netherlands are the two main gateways for cocaine dispatched from Latin America to enter Europe, often hidden in consignments of fruit.

The Belgian facility has been breaking records each successive year over the past decade for the amount of cocaine detected and seized.

As of mid-October last year, the running total stood at 71.62 tonnes after some hundred discoveries in the port, according to a spokesman for the finance ministry, which is in charge of customs inspections.

The size of the seizures only grew in the last quarter of 2022, towards Christmas, a period when cocaine consumption spikes, a Belgian customs spokeswoman told AFP.

Several interceptions netted more than three tonnes of cocaine each — and in mid-October, one consignment comprising two containers from Suriname contained a total of six tonnes.

At that rate, it appears likely that the total haul for 2022 will be over 100 tonnes.

Yet authorities estimate they stop only around 10 percent of the volume of the illegal drug smuggled through Antwerp, despite deploying sniffer dogs and container scanners.

On Monday, an 11-year-old girl was killed after attackers opened fire on a home in Antwerp in a shooting mayor Bart De Wever called a suspected “settling of scores” between gangs.

Prosecutors in Antwerp say that over the past five years they have recorded more than 200 violent incidents linked to drug smuggling.

These include threats of violence, assaults, and even explosives thrown at homes.

So much of the drug has been intercepted that law enforcement officials worry they do not have enough incinerator capacity to destroy it.

This has created another problem: fears that security around the sites used to store the seized cocaine may not be enough to deter criminals intent on stealing it.

Belgium is the main point of entry into Europe for cocaine, ahead of Spain and the Netherlands, which was also expected to release the figure for Rotterdam’s 2022 cocaine haul.

The five main exporting countries of the drug are Panama, Ecuador, Paraguay, Colombia and Brazil, based on the volumes intercepted. 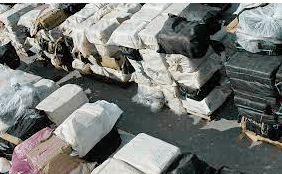