On Tuesday, the sentencing for an Arcata man accused of trafficking the largest amount of drugs seized by a bust in Humboldt County Drug Task Force history was delayed indefinitely.

Judge Kaleb Cockrum said there were aspects of 69-year-old Jose Lomeli-Osuna’s plea he was concerned about and he did not to be tied to the sentencing. Now-retired Judge Christopher Wilson presided over Lomeli-Osuna’s negotiated settlement, and the sentencing was put off until either Wilson comes back or they find another option, scheduling a setting hearing for Jan. 24.

There is not a definite date set for when Wilson is expected to return to court. Deputy District Attorney Ian Harris asked for the hearing to be set soon in order to determine when Wilson will be available.

Cockrum added that he thinks other sentences, including higher sentences, would be more appropriate for the case. Lomeli-Osuna pleaded guilty to four counts of possessing a controlled substance for sale, transporting a controlled substance to sell it and several special allegations relating to the sizeable amount of drugs in his possession. Shortly after his arrest, the Humboldt County Drug Task Force seized many pounds of methamphetamine, heroin and fentanyl stored in locations across Fortuna, McKinleyville, Arcata and Eureka.

During Lomeli-Osuna’s pleading hearing, Wilson indicated that he will serve a split sentence, with up to six years in custody and the rest on mandatory supervision in part because of his age and the Humboldt County jail’s ability to house him as they lack the capacity to keep him for 14 years, the full amount of time in the plea agreement.

As part of the bust in which Lomeli-Osuna was arrested, the Humboldt County Drug Task Force seized 30 pounds of meth, 5.5 pounds of cocaine, three pounds of heroin, two pounds of fentanyl, 150 marijuana plants, 50 pounds of processed marijuana, $115,500 and two revolvers. The drugs, money and weapons were found in six locations including multiple apartments — one in Eureka, one in Arcata and two in Fortuna — a storage unit in McKinleyville and an auto body shop in Eureka.

The 30 pounds of meth exceed the total amount of meth seized in task force operations in all of 2021.

Lomeli-Osuna’s defense, Conflict Counsel Meagan O’Connell, needed her client to enter a time waiver in order put the setting date out. He agreed to the waiver. 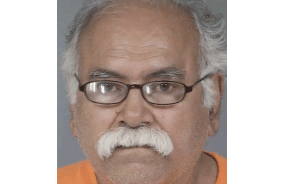